World Theatre Day 2021: Which is the Smallest Operating Theatre in the World? 11 Interesting Facts About This Art Form You May Not Have Known!

World Theatre Day is celebrated every year on March 27 to make people aware about the beautiful essence of this art form. This event is being celebrated since 1962 by ITI Centres, ITI Cooperating Members, theatre professionals, theatre organisations, theatre universities and theatre lovers all over the world. 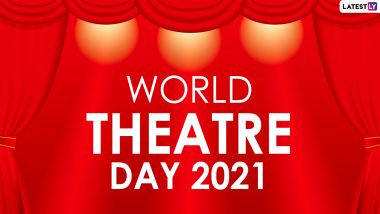 World Theatre Day is celebrated every year on March 27 to make people aware about the beautiful essence of this art form. This event is being celebrated since 1962 by ITI Centres, ITI Cooperating Members, theatre professionals, theatre organisations, theatre universities and theatre lovers all over the world. This day is also observed as a wake up call for governments, politicians and institutions which have not yet recognised the value of theatre to the people. Meanwhile, on the occasion of World Theatre Day 2021, we will share with you 11 interesting facts about theatres.

On World Theatre Day, various national and international theatre events are organised to mark this occasion. One of the most important of these is the circulation of the World Theatre Day Message through which at the invitation of ITI, a figure of world stature shares his or her reflections on the theme of Theatre and a Culture of Peace. The first World Theatre Day Message was written by Jean Cocteau in 1962. World Theatre Day 2021 will be celebrated online due to the ongoing pandemic. Now let us take a look at some facts about theatres. March 2021 Holidays Calendar With Festivals & Events.

1. There are over 1,300 active theatres in the UK, including amateur and professional venues, pop-up theatres and established institutions.

2. The Birmingham Hippodrome is the busiest in the UK, attracting 520,000 visitors per year.

3. Kremlhoftheater Villach in Austria. is the smallest operating theatre in the world with area of 1.3 square meter.

4. The Royal Albert Hall has the highest seating capacity of any London theatre with space for 3,901 audience members.

5. Ghost light on stage of the theatre is kept open after everyone has left for the night. This might be a safety measure or a way to appease any ghosts in the area.

6. The British illusionist organised 29 costume changes for the 2002 Cambridge Theatre production of Our House. Kieve received a Guinness World Record for his efforts.

7. Visitors to Disney amusement parks are, effectively, enjoying a large-scale theatre performance. All employees of the parks are known as cast members, and Walt Disney World has 2 million costumes in its theatrical wardrobes.

8. Building of the Garrick Theatre was especially difficult as it had an underground river running beneath it.

9. Prior to becoming Pope, Pope John Paul II wrote a play called The Jeweller's Shop which played the Westminster Theatre in 1982.

10. William Shakespeare once lived in a house on the present day site of The Barbican Centre.

11. John Gielgud became the fire warden for Theatre Royal Haymarket during the Blitz.

On World Theatre Day, play your part in promoting this art form by encouraging your friends and relatives to watch more plays and appreciate the artist. We wish you all a very Happy World Theatre Day.

(The above story first appeared on LatestLY on Mar 27, 2021 10:16 AM IST. For more news and updates on politics, world, sports, entertainment and lifestyle, log on to our website latestly.com).