Will Eating Insects Be a Need of Future? Growing Population Could Promote Insects as Superfoods 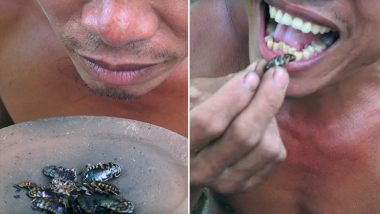 The population of the globe is increasing at a speed, which unfortunately the food supply cannot compete with. And some people have expressed a possibility that in future, people may have to turn to insects for their appetite! Sounds strange? Well, there are enough people out there who are already doing so but in secluded parts or either on adventure TV shows. But insects could become a part of regular meals in the future as an alternative to meet our food needs. Celebrity chef Gary Mehigan has made the latest claim about turning to insects as food for survival. Eat Crickets For A Healthy Stomach? 5 Facts About Eating Insects, Bugs and Other Creepy Crawlies.

Mehigan has been a judge of Masterchef Australia for the last nine years. He was quoted to PTI, "Insects are eaten all over the world, some are absolutely delicious and with the pressure of an ever-growing population on our planet it will become a viable and attractive option." He also mentioned that superfoods or protein bars and food pills will not help as options. Disgusting Food Museum Opens in Sweden! From Bull’s Penis to Mouse Wine, Here Is the Menu (View Pics).

There have been some studies in the past which have spoken about insects as a delicacy and also an option for future survival. The UN Food and Agriculture Organization have published an in-depth report which talks about edible insects. It talks in detail about insects as future food security. Currently, we have been able to produce enough for the food requirement across the globe, but it won't be possible to make it double in the coming years. As more are striving towards the development and infrastructural aspects, food supply may not be as much. The world population is expected to reach a whopping nine billion by 2050! "The global community has to make some very real changes to the way we consume the world's resources or the outcome for humanity is not all that rosy," said Mehigan.

The celebrity chef also spoke about vegetarianism and love for Indian food. He said India has some of the best options in vegetarian food. On his recent trip to the country he tried some Indian dishes and has fell in love with it. "On a recent visit I fell in love with all sorts of dishes paya and nahari, tar ghost, chhole bhatura, bhapa ilish, masala dosa, kacchi biryani from Hyderabad. If you look at those dishes they are so complex, layered with flavour texture and utterly delicious how could I say no to all of that," he was quoted.

The point remains about the rising population and growing pressure on the food supply. There could be a time some years from now when insects will be promoted as superfoods and best options for survival. (With PTI Inputs)

(The above story first appeared on LatestLY on Dec 26, 2018 07:50 PM IST. For more news and updates on politics, world, sports, entertainment and lifestyle, log on to our website latestly.com).