Eat Crickets For A Healthy Stomach? 5 Facts About Eating Insects, Bugs and Other Creepy Crawlies 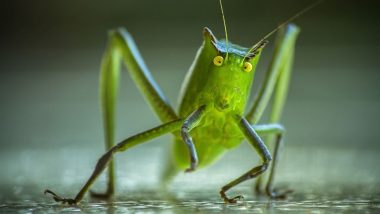 Very few people in the world are unperturbed by the sight of roach and even fewer can bring themselves to touch one. And if like them, you have a severe fear of bugs, you won’t like what we are about to tell you. A clinical trial published in the journal Scientific Reports states that regularly eating crickets (you read that right), can improve gut health and lower inflammation. We know, gross! The study says that edible insects (or nasty creepy crawlies) are a nutritious, protein-rich snack, which could offer an alternative to meat-based foods.

Researchers who conducted the study evaluated the effects of consuming 25 grams of cricket powder in the subjects, while also assessing its safety. They concluded that not only are insects safe for human consumption but also incredibly nutritious and good for the stomach. The reason could be chitin, a fibrous substance present in insects that could be good for your tummy. And if you have survived reading this far, here are some facts about eating insects that may make you look at insects differently.

The United Nations Food and Agricultural Organisation released a report in 2013, listing 1,900 insects that are edible and safe for consumption. Many of our mental block towards insects are culturally learnt since people are generally disgusted by creepy crawlies and think them to be unsanitary.

This may be shocking, but the insect contamination in grains may have an unforeseen benefit. It's a general practice to clean grains like rice, millet and wheat before consuming. People pick out insects like rice weevil larvae out of the grains before washing and cooking it. But studies say that these "impurities" may actually be good. Rice weevil larvae contribute to the vitamin requirements in the rice-eating regions.

With the population touted to reach 9 billion by 2050, there will be a lot of demand for animal protein sources like beef, chicken and fish, which may not be sufficient to meet everyone’s needs. Apart from having just about the same amount of protein, crickets and insects are also great sources of fats, vitamins and minerals.

The problem with rearing livestock like goats, cattle and poultry for is that it isn’t great for the environment. It is associated with pollution, land consumption, fossil fuel wastage, animal methane and a shortage of land. Eating crickets and insects can be viewed as an eco-friendly alternative to meat because insects have greater food conversion efficiency, produce lesser greenhouse gases and require less land and water.

Rearing insects make solid business sense too. United Nations believe that insect harvesting can be a low-capital investment option that can be open even to the most marginalised members of the society, such as women and the landless. Minilivestock, as it is called, can provide livelihood opportunities for the urban and rural people. Low tech or sophisticated, insect rearing can be carried out at any level of investment.

Insects can be a nutritious food, especially in the future when we can expect a major paucity of protein sources. But make no mistake! Not all insects can be eaten. Just last week, a Chinese mother and son duo was taken ill after they eat live centipedes. Insects like beetles, butterflies, moths, bees, wasps, ants, grasshoppers, locusts and crickets are named as the safe ones for consumption.

(The above story first appeared on LatestLY on Aug 06, 2018 10:56 PM IST. For more news and updates on politics, world, sports, entertainment and lifestyle, log on to our website latestly.com).