World Vegan Day 2018: What’s The Difference Between Vegetarianism and Veganism?

Vegetarianism is a diet, but veganism is much more than just food; it's a way of life. 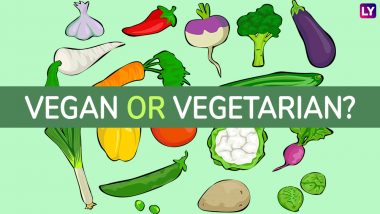 On November 1 ever year, the world celebrates World Vegan Day to highlight the need for a cruelty-free way of life today. Veganism as a concept has been gaining popularity over the recent years with many famous personalities pledging their support for the movement. Those who have a sketchy idea of veganism know that it has something to do with preventing animal cruelty. But then, so does vegetarianism. So what’s the difference between the two? Veganism and vegetarianism both believe in shunning meat. But unlike vegetarianism, veganism is not just a diet, it is a pledge to prevent all sorts of cruelty towards living beings. A vegan way of life goes beyond just diet and health. For the benefit of those who don’t understand the difference between the two, here are some points that will clear things up. Why A Plant-Based, Vegetarian Diet May Be Healthier According to Ayurveda.

Veganism is a Sub-Group of Vegetarianism

In India, vegetarianism is easily understood since it is predominantly a vegetarian society. Twenty percent of the population of the country is vegetarian, according to a survey by US-based anthropologist Balmurti Natarajan and economist Suraj Jacob. Veganism is a sub-group of vegetarianism, since it is more restrictive in nature. 7 High-Protein Vegetarian Foods For A Plant-Based Diet.

Vegetarianism is a Diet; Veganism is a Way of Life

Vegetarianism is understood mainly in the context of food. But veganism is not just a diet but a way of life. A veg diet comprises plant-based foods, dairy products and animal source products except for meat. But veganism shuns anything derived from animal suffering, which includes dairy products, honey, silk and leather. In fact, certain plant-based foods like palm oil aren’t considered vegan because it contributes to animal cruelty. Hundreds of orang-utans in places like Indonesia are left homeless after the forests were cleared for oil-palm tree cultivation. Aamir Khan, Sonam Kapoor, Esha Gupta – 6 of the HOTTEST Vegans in Bollywood – View Pics.

Vegetarian Has Religious Roots; Veganism is a Choice

Many vegetarians in the country chose to eat a mostly plant-based diet because it is dictated by religions such as Jainism and Hinduism. Veganism as a concept was coined only in 1944 and most adherents chose to be vegans out of choice. But a certain sect of Christianity, followers of the Romanian Orthodox Church, observes fasts where eating any kind of animal product is prohibited.  Can Swapping Vegan Diet For The Carnivore Diet Help You Lose Weight And Improve Your Sex Life?

Often for people, vegetarianism is a stepping stone towards veganism, which is a more restrictive diet. But the real difference is that a vegan way of life is much more than just diet and health. It is a commitment towards making the world a better place for humans and animals alike.

(The above story first appeared on LatestLY on Nov 01, 2018 04:32 PM IST. For more news and updates on politics, world, sports, entertainment and lifestyle, log on to our website latestly.com).