Research reveals that spending some time soaking up in the sunshine is good for health and the benefits are more than just getting that extra dose of vitamin D. 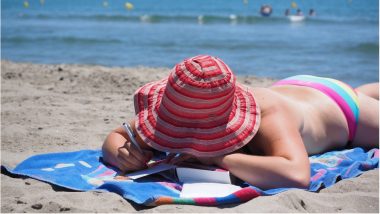 Now that the winters have receded, and the sun is shining bright, it is time to get some dose of vitamin D. Research reveals that spending some time soaking up in the sunshine is good for health and the benefits are more than just getting that extra dose of vitamin D. Although to sunbathe, a Doordarshan staffer was arrested from Pune’s Sinhagad fort. Unfortunately, his reason seemed more as an act of being drunk and caused awkwardness for other trekkers. But there are several health benefits – both physical and psychological -  associated with donning your birthday suit more often. P.S -  Do not get arrested.

More vitamin D: At least once in our lives, doctors have asked us to bask in the sunlight as sun is the best source of vitamin D. Being naked outside will help you get more vitamin D which will improve skin, bone and organ health. The vitamin helps us build healthy bones and teeth and may protect us against bowel cancer.

Reduces toxins: When you are completely covered all the time, the toxins released from the sweat are absorbed by the clothes and allow your skin to reabsorb them. Those toxins can cause skin problems but lying down naked for a while will give your skin a chance to eliminate them for good.

Healthier lives: We’ve been often told that too much exposure to sun exposes us to skin cancer. However, scientists have discovered some positive sides to worshipping the sun. Research indicates that sunlight may protect us against wide range of lethal health conditions such as obesity, heart attacks, strokes and asthma. A good dose of sunshine is going to make us live longer, healthier and happier lives. It also helps in elevating our mood.

Helps you lose weight: Ultraviolet radiation may suppress the development of obesity and the symptoms of type 2 diabetes. These effects are again to be believed because of the sun boosting production of nitric oxide. The research reveals that without enough nitric oxide in the bloodstream, insulin may not work properly, allowing diabetes to set in.

Testosterone booster: This is good news for men. Most men are not aware of their testosterone levels, but they always want it to be on the high side. Sunlight can play a role in increasing the amount of testosterone produced in the body. One study found that exposure to sunlight on the back increased testosterone production by 120%.

Facts suggest that nude sun-bathing was commonly practiced by ancient Greeks. Absorb the sun’s rays during the early morning or just before sunset, when the rays are slanting and when your shadow is longer than you are. The question then arises, we live in a country where we could be arrested for indecent exposure. So, what do we do? We need to find a way around to soak up the sun without breaking the law or causing discomfort to others. Those living in high-rise apartments can do it on the roof. If you own a backyard, put up a fence so that your neighbour and you both get some privacy. Just be careful before stripping down.

(The above story first appeared on LatestLY on Feb 26, 2018 11:57 AM IST. For more news and updates on politics, world, sports, entertainment and lifestyle, log on to our website latestly.com).