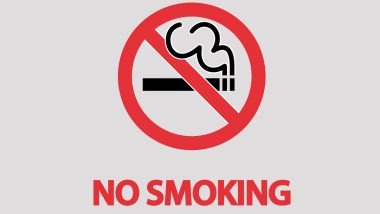 Mumbai /New Delhi, May 31:  Tobacco use is one of the major risk factors for multiple chronic diseases, including lung disease. In India, use of tobacco accounts for approx. 1.35 million deaths every year and is one of the major causes of death and disease.

According to the Global Adult Tobacco Survey India (2016-17) nearly 267 million adults (15 years and above) i.e.29 per cent of all adults in India use tobacco.1 GATS-2 data showed that 1 of every 8 young (age group of 15 to 24 years) Indian uses some form of tobacco.  Smoking Affects Immunity, Increases COVID-19 Risk: Experts

The most prevalent form of tobacco use in India is smokeless tobacco, commonly used products for same include khaini, gutkha, betel quid with tobacco and zarda. The smoking forms of tobacco used in India include bidi, cigarette and hookah. Smoking is a major risk factor for COPD, both active and passive. In fact, exposure to passive smoking in early childhood could pave path for chronic obstructive pulmonary disorder (COPD) in future.

On the occasion of the World No Tobacco Day, Dr Samir D Garde, Pulmonologist, Global Hospital, Parel, Dhanvantri Hospital and Research Centre and ACI Cumballa Hill Hospital, Mumbai emphasized on connection between tobacco use and risk of respiratory disease. As cigarette smoking is one of the most common form of tobacco use and highlighted on exposure to smoking and importance of quitting.

"The earlier the exposure to risk factor like smoking, the greater is the level of decline in lung function. Continuing to smoke when you have respiratory disease like COPD further worsens lung function. Fortunately, quitting to smoke or use tobacco in any form and following all instructions given by your doctor can reduce the number of hospitalisations and the decline of lung function. The earlier the quitting, better you manage the disease and save your lungs from more damage," he mentioned.

COPD, a common respiratory disease, is a major reason for morbidity in India, in fact, it was the top 2nd reason for deaths in India in year 2019. Data suggests that an Indian COPD patient spends on an average 15 per cent of his income on smoking products and up to 30 per cent on disease management.

Global Initiative for Chronic Obstructive Lung Disease (GOLD) 2021 Report highlights that "smoking" is one of the major risk factor for COPD and also a major trigger for flare-ups/ worsening of symptoms in patients with COPD. Smoking can damage lung/s to a level that in and out movement of enough air becomes hard, leading to breathlessness and other symptoms in COPD. Thus, it is advised to quit smoking.

"If you have COPD, quitting smoking, quitting use of all tobacco products and even avoiding passive smoking is the best thing you can do to protect your lungs and keep your COPD symptoms from getting worse. This can help you stay more active and enjoy life. Reach out to your family and friends by telling them about your goal to quit. Take a break from people and situations that make you want to smoke. Stressing over it would not help so take 1 day at a time. If needed, you should speak to your doctor and ask help," said Dr Prashant Saxena, Critical Care Head - Pulmonology & Sleep Medicine at Max Smart Hospital, New Delhi.

Anyone can quit smoking and use of other tobacco products. Listing reasons to quit helps many people to themselves why they decided to quit and to stay on track. There are multiple ways and programs to help people to quit. Doctors can suggest multiple approaches to help including 1) Medicines, 2) Nicotine replacement therapy and/ or 3) Support groups or counselling. It is important to reach out for right help whenever needed.