Is Wearing Mask While Jogging or Exercising Safe? Experts Warn People After Wuhan Man Suffers Burst Lung While Running with a Mask On; Know More About Pneumothorax

Is it safe to wear a mask while jogging, exercising or running? Experts warn people about wearing masks while running as in may cause inflammation of the lungs. People who are about to start exercising are made aware that there are reports of damaged lungs because of having face masks on. 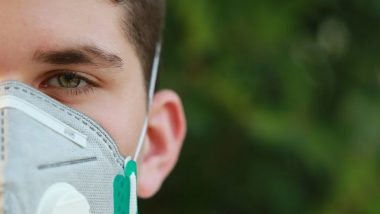 Is it safe to wear a mask while jogging, exercising or running? Experts warn people about wearing masks while running as in may cause major inflammation and even cause lungs to burst. People who are about to start exercising are made aware that there are reports of damaged lungs because of having face masks on while doing strenuous exercises. A young male from the Wuhan district of China suffered a damaged lung because of jogging with a face mask on. It is being said that he was asked to keep a mask one while doing any activity and due to overexertion he had his lungs collapsed. The man was having difficulty in breathing and had to undergo major surgery. However, it was found out that man’s left lung was 90 percent compressed, moving his heart to the right side of his body.

Ever since the case has resurfaced people are asked to not wear a mask while running, jogging, exercising or doing any other physically exerting activity. The man’s lung is said to have been burst because he was wearing a mask while running. Doc Harman said to EW, "A man in China burst a lung after running for more than two miles in the coronavirus epicentre city of Wuhan while wearing a face mask. I’m telling everyone to take it easy from Monday as we officially move into Phase 1 of the lockdown. As everyone as been cooped up for so long there is a desire to carry on with exercise as before, the problem is people will not accept they are unfit and need to take things slowly."

This is a condition that causes the lungs to collapse when air leaks into the space between the lungs and chest wall. This is a potentially fatal condition as it causes a penetrating chest injury. Often pneumothorax is also caused by certain medical procedures or lung disease. The condition is characterised by breathlessness so much so that people often just collapse. Usually, as one of the treatment methods, needle or tube is used to remove excess air. However,  chest trauma of this kind is often critical. Fatal complications such as cardiac arrest, respiratory failure, shock, and death can be caused by pneumothorax.

Recently, the US Centers for Disease Control and Prevention recommended that people wear cloth face coverings when out in public. One must be extremely careful in places where it's hard to stay at least 6 feet away from others.

However, when it comes to doing strenuous physical activity like running, jogging, breathing becomes difficult through a mask when.  The more distance you can keep between yourself and others, the better, says Summer Johnson McGee, Dean of the University of New Haven's School of Health Sciences. Masks are designed to prevent the wearer from possibly spreading the virus to others or being exposed themselves

(The above story first appeared on LatestLY on May 21, 2020 01:39 PM IST. For more news and updates on politics, world, sports, entertainment and lifestyle, log on to our website latestly.com).