Taksh and Kritika struggled with gender identity issues since a young age. Doctors at Fortis gave them a new lease of life. 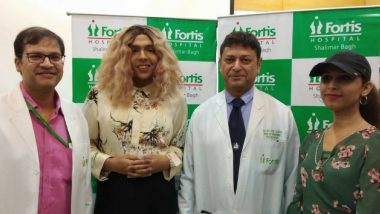 The first case was of a 22-year-old fashion model, Taksh, who underwent surgery during February 2018 which resulted in the reassignment of her sex from male to female. The second case was Kritika, also 22 years old, whose surgery also took place recently, thereby, successfully transforming her from a male into a female.

In the first case, Taksh struggled with her identity for years and was uncomfortable in her own skin. She felt trapped and could not exactly understand why. Since the age of four, she had been in touch with her feminine side and would often drape herself in women’s clothing. Her classmates used to tease her and she was taken to various mental health professionals. However, her gender dysphoria was dismissed as a harmless ploy for attention on countless occasions. Later, her situation developed a silver lining because of her extremely supportive parents who understood her. They helped her come to terms with her innermost thoughts and desires and agreed to the surgery. This was the biggest gift they could have given her for her 23rd birthday.

In the second case, Kritika’s struggle was overwhelming and painful. As a male, she was literally mentally scarred when a group of boys tried to assault her sexually. It led to a deep psychological impact for which she sought therapy. She took the decision to undergo gender affirmation surgery, which successfully took place in 2017.

Kritika shared, “After approval from my psychiatrist, I started my hormone therapy. While my body was starting to show changes both internally and externally, I started to look for a job. However, when I used to tell employers about my transition, my job interviews were cancelled one after the other. I faced endless challenges when I wanted my identity cards and mark sheets to read as a female. I not only had to deal with discrimination at work, fight the battle of transition, but had to struggle to get the new identity of a female on certificates and Identity cards. It was an extremely hard time for me. However, I am glad I went through it. I was one of the first persons to get my identity changed to a female before the surgery. I have emerged stronger from this experience. My fight has served as an inspiration for many other transgenders to get their desired identity.”

Dr. Richie Gupta, Director and Head, Department of Plastic, Cosmetic and Reconstructive Surgery, Fortis Hospital, Shalimar Bagh said, “Gender Dysphoria is a condition, in which a person has a persistent awareness of being in the wrong body. The person’s mind (Gender) is at conflict with the current physical body and sex as assigned at birth. The condition has a definite neurologic, genetic and hormonal basis, as proven by scientific research. The first step is to make a firm diagnosis of gender dysphoria and to rule out psychiatric conditions such as schizophrenia. This is done with the help of psychometric analysis and opinion of two different psychiatry teams. In our case, while one psychiatry team belongs to the Fortis, the other is an outside referral, and this is done to remove any potential of a bias.

Psychiatrists also help treat the underlying depression, which some of these patients suffer from, due to being misunderstood and being at conflict with the society. The next step is to counsel and analyze if they can deal with the social life and the societal pressures, in their new sexual role. If a male is undergoing the transition to a female - It must be ensured that the person is comfortable being addressed as a female. They must undergo real-life experiences living in a desired sexual role, in these cases, as a female for a period of more than two years. They also had to go through an endocrinological evaluation and hormone therapy. After that, surgery was done (Feminising Genitoplasty), which involved removal of penis and reconstruction of a new vagina, clitoris and labia.

The procedure also involved recession of urethra to a female position. Breast augmentation is required in a few cases, in which sufficient breast enlargement does not occur even at eighteen months of hormone therapy, or where the transwoman specifically demands the procedure. Optional procedures which facilitate them in the desired sexual role in the society include, voice change surgery, hair transplants, rhinoplasty, liposuction and facial feminisation surgery, which consists of forehead and jaw shaping surgeries.”

Mr. Mahipal Bhanot, Facility Director, Fortis Hospital, Shalimar Bagh said, “Fortis Hospital, Shalimar Bagh follows the 7th version of Standards of Care (SOC) for treatment of individuals with gender dysphoria, published by World Professional Association for Transgender Health (WPATH), in 2011. These are internationally established guidelines. While this is primarily a document for health professionals, the SOC may also be used by individuals, their families, and social institutions to understand how they can assist with promoting optimal health for members of this diverse population. Sex Reassignment procedures include primary care, gynecologic and urologic care, reproductive options, voice and communication therapy, mental health services (e.g. assessment, counselling, psychotherapy), and hormonal and surgical treatments, all under one roof, at the Gender Identity Clinic (GIC), of Fortis Hospital Shalimar Bagh.”

(The above story first appeared on LatestLY on May 31, 2018 06:27 PM IST. For more news and updates on politics, world, sports, entertainment and lifestyle, log on to our website latestly.com).