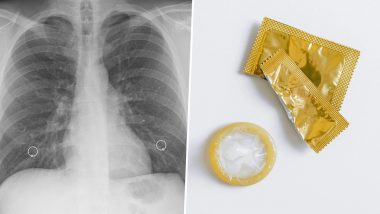 A school teacher, the 27-year-old, was prescribed antibiotics and anti-tuberculosis treatment, which appeared to have no impact on her symptoms until she finally visited the hospital. The case report published in the National Library of Medicine notes that the woman’s sputum was tested for TB but was negative. She underwent a chest X-ray, and doctors found inflammation in the upper right lobe of her lungs. It appeared to be “an inverted bag-like structure ‘sitting’ in the bronchus,” the doctors wrote in the report. Most Common Myths About Tuberculosis Debunked!

Whatever the case might, the doctors interestingly added that the case might be the only one of its kind in the medical literature. Besides, the woman may have to have a further bronchoscopy to remove the remaining small pieces of the condom that were left in her lung.

(The above story first appeared on LatestLY on Mar 23, 2021 10:40 AM IST. For more news and updates on politics, world, sports, entertainment and lifestyle, log on to our website latestly.com).