Premiering on June 23rd 2021, theater/film fusion project RIDE SHARE is set to run on Writer’s Theater website for a month long. As Writer’s Theater’s first film project, despite its incredible timely story, the immediate attention was paid to the cinematographer behind the project, Xin Tang, also known as Tannie Xin Tang. 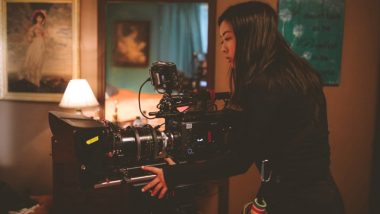 Premiering on June 23rd 2021, theater/film fusion project RIDE SHARE is set to run on Writer’s Theater website for a month long. As Writer’s Theater’s first film project, despite its incredible timely story, the immediate attention was paid to the cinematographer behind the project, Xin Tang, also known as Tannie Xin Tang. Tang designs and crafts a visual world that perfectly illustrates the Black ride share driver’s journey navigating through different passengers and their lives after being laid off due to pandemic crisis. From her cinematic imagery, RIDE SHARE has quickly drawn public’s attention especially in the theatric world.

The Start of Everything

Born and raised in China, Tang grew up in a household full of architecture designers. She had never envisioned to be working in the entertainment industry. One thing she knows for sure is the fascination she has towards the storytelling aspect of everything she watched on screen. Tang’s first movie experience was actually a propaganda movie mandatory for 3rd graders at the time. “Mom…” the daughter screams. Camera cuts to a woman lighting herself on fire murmuring, “Xiaomei, mom is about to gain the ticket to heaven”. She smiles, with relief. Daughter continues to cry as many others are sitting in the same pit of fire “earning” their way to heaven. As the fire dies down, the camera shows the aftermath, black carbonized creatures. Xiaomei runs to where her mother was, yet she is no longer recognizable in a ruin of smoke and remains, only wailing is heard… fades to black. This was an actual scene in the movie. Tang was feeling traumatic after watching it. Little did she know, it was the power of storytelling.

Just as Tang was thinking about sadness being the only feeling she can get out of movies, she watched her second movie ever, House of Flying Daggers, directed by Zhang Yimou. In which, she tasted the ardent love, nerve wracking tactic-play and passionate choreography. Tang has come to realize that each film is a unique piece of existence providing a full emotional spectrum, impacting the audience in a subtle yet profound manner. She was captivated by the magic behind creating those images and visuals telling a powerful story. She has finally made the decision to pursue director of photography as her career goal as college comes to an end, in the hope of creating a powerful visual story to influence others as how she was affected by watching other filmmakers’ creation.

Tang officially started her career working as grip and electric in New York. As she believes, being able to paint the frame with light is key to becoming an amazing cinematographer. During her time working in the men-dominated lighting department, Tang always feels like she must “man up” to prove her eligibility working in this industry due to the lack of faces like her. It was truly a struggle of simply having others believe in her being a competent team member. Yet, she didn’t let that get in the way, instead persevering through whatever obstacles standing in the path. Ultimately, she is equipped with all the lighting knowledge enough for her to make the transition into becoming a cinematographer.

Tang loves Steve Jobs’ speech where he talked about connecting dots in life. That is what she has been upholding in her cinematography. Events in life happen for a reason, they each are little dots. Once you look back at them, you can connect the dots together and see where they have led you, good or bad. And every dot sets up for who she is as a person with a unique life experience. Essentially, these past dots give her a voice—a tool of sensitivity to apply for approaching a story’s cinematography. It makes her confident and allows her to follow her heart when it comes to making creative decisions, rather than simply follow a set of made-up rules by others. Tang strives to continue telling distinctive stories with a sturdy technical proficiency, a personal sensitivity, and a collaborative spirit.