Sam Harding, the Very Versatile Entrepreneur Who Doesn’t Believe in Giving Up

The inspiration behind his career is watching old Jim Carrey movies when he was a kid. He used to watch these movies with his dad. Also, Sam met his mentor at a very young age named Joey Combo. He met Joey in theatre and learnt a lot of his basic skills of acting from him. Joey was the first person to help him believe that he could make it big. 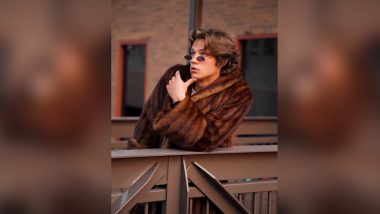 Sam Harding is an actor, model, singer, songwriter and a well-known person on YouTube. He was born in Kansas City, Missouri. He started working at an early age. He used to act in the theatre when he was 8 years old. Also, he was starred in over 20 musical performances. Before the age of 15, Sam performed in some of the biggest theatres in Kansas City. Soon after then he was starred in dozens of short films and many commercials in Kansas and became one of the known local actors in Kansas City at a very young age. Once Sam was 18, his manager asked him whether he would like to take the next step in his career and move to LA.

Sam immediately said yes to it and prepared to move across the country. Being a graduate in 2020 he wasn't able to move to California until November 2020. However, during quarantine Sam took advantage of the time and started writing music based on hardships and emotions that recited his story of never giving up on himself. Sam’s music is releasing on all streaming platforms this year. The good part is, it has been only three months of being in LA for Sam and he has already starred in multiple short films on Amazon Prime, music videos and a lot of modelling gigs. In the very first month, Sam signed in an Acting agency and also started his YouTube channel.

The inspiration behind his career is watching old Jim Carrey movies when he was a kid. He used to watch these movies with his dad. Also, Sam met his mentor at a very young age named Joey Combo. He met Joey in theatre and learnt a lot of his basic skills of acting from him. Joey was the first person to help him believe that he could make it big.

A turning point came in Sam’s life when he was diagnosed with a rare autoimmune disease called Pandas (Paediatric Autoimmune Neuropsychiatric Disorders Associated) which affected his childhood heavily. It caused swelling to his brain and started sending wrong signals to his body resulting in uncontrollable verbal and motor tics. Due to the disorder, Sam could not write anymore as his hands would get an uncontrollable jolt. He had to leave school because he was not able to attend the class as he made noises. He continued with home-schooling. Due to the situation, Sam was bullied, depressed and was questioning his life. However, Sam was still doing theatre and he started noticing that every time he went on stage his tics would go away. As soon as he would get off stage the tics would come back. Soon, Sam got addicted to being on stage which got him a chance of acting and singing in the film. “I remember the first time I made the crowd laugh in “the Princess bride” was the time I finally started feeling noticed vs feeling so alone”, Sam stated. This was a life-changing moment for Sam.

“I am still pushing through because I don't want something like this disorder holding me back from my dreams. As I have got older my tics have been a lot better. Some don't even notice that I have them but I still do and it is a struggle for me every day”, Sam said.

As Sam never met and still haven’t met anyone with the same disorder he used to hear many things but always made sure to show other kids that such disorder or any other sickness won’t stop you from achieving anything. “I am excited about my music it is truly something that hasn't been heard before it is unique. I have spent so many hours on it trying to make it the best it can be, it has all of my heart in it, it is a very special story that is going to be told through my music”, Sam said. Sam is also trying to grow on Instagram and YouTube. He looks forward to growing in acting career too. “Acting is my first love in the entertainment industry. My purpose is to influence people, make people laugh, cry through my music or my movies or my YouTube”, Sam stated.