Buddha Purnima 2022: From Bhutan to India, 5 Most Popular Giant Statues of Lord Buddha From Around the World

Buddhism was originally started by Lord Gautama Buddha, the founder of Buddhism who lived in India over 2,000 years ago. His teachings and lessons are still prevailing and followed by millions of his devotees. To celebrate his birth anniversary on 16th May, we have brought to you a list of the world's five famous giant statues of Lord Buddha. 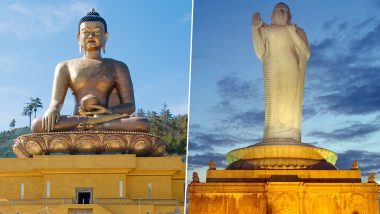 East and South East Aisa will observe the auspicious occasion of Buddha Purnima on Monday, 16th May 2022. The festival commemorates the death and enlightenment of Lord Gautama Buddha and is celebrated by the Hindu and Buddhist communities with religious devotion. The traditional holiday is also marked as Vesak Day or Buddha Jayanti. Followers of Buddha are celebrating the occasion for centuries by wearing white clothes, making kheer and worshipping the idol of the Awakened One. Each pose, posture, expression and hand gesture is significant to the life of Buddha. The exact date of Buddha's Birthday is based on the Asian lunisolar calendars and is primarily celebrated in the Baisakh month of the Buddhist calendar. Buddhism has prevailed for decades, and its message and teaching can be explored in symbolic tourist attractions through historical sites. This Buddha Purnima let's have a look at the five most popular giant statues of Lord Buddha from across the world that get major footfall. When Is Buddha Purnima 2022? Know Date, Traditions, Tithi and Significance of Vesak Day Celebrating Gautama Buddha’s Birthday.

The Buddha Dordenma giant statue is made up of bronze and gold that is made at the Kuenselphodrang Nature Park and can be overlooked at the Southern entrance to Thimphu Valley in Bhutan.

Located at Lingyun Mountain’s Qifeng Peak, the 71 meters giant statue of the Lord Buddha is perfectly carved out of a cliff face of Cretaceous red bed sandstone.

Fo Guan Shan Monastery is the biggest Buddhist monastery in Taiwan which has many universities and shrines that promote a new form of Humanistic Buddhism.

The single largest monolithic statue in all of India is one of the most famous spots in Hyderabad. The 17 meters large statue was sculpted by a group of artisans from a single piece of stone.

The Lord Buddha lying down is the largest reclining Buddha in the world and the one that is standing directly behind is 116 metres tall and is known as Laykyun Setkyar. This Great Buddha is located in Myanmar.

Moreover, Lord Buddha is also known as Buddha, The Awakened One, and has been signified by Buddha statues for centuries. All the postures, hand gestures and expressions of the statue are more than a physical depiction of Buddha, they all have meaning and lessons depicting His life.

(The above story first appeared on LatestLY on May 16, 2022 10:04 AM IST. For more news and updates on politics, world, sports, entertainment and lifestyle, log on to our website latestly.com).