Buddha Purnima 2022 will be observed on Monday, May 16. The festival celebrated by Buddhist and Hindu communities commemorates the birth of Prince Siddharta Gautama, who later became the founder of Buddhism and was recognised as Lord Buddha. 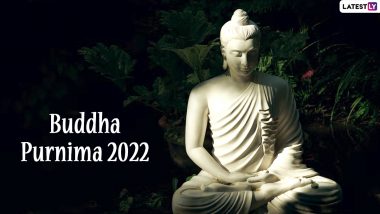 Buddha Purnima or Buddha Pournami is an annual festival that falls on the day of the Full Moon in the month of April or May. The gazetted holiday is widely celebrated by Buddhists and Hindus across the country as well as in nations like Sri Lanka, Indonesia, Malaysia etc. The celebration is observed as the birth anniversary and date of enlightenment and death of Gautama Buddha, who was an ascetic and spiritual teacher of South Asia. The date of Buddha Purnima varies as per the Asian lunisolar calendar and Gregorian Calendar. Buddha Purnima 2022 will be observed on Monday, May 16. Buddhist and Hindu communities celebrate the festival on the full moon day of Vaisakh month with religious fervour, which is also rendered Buddha Jayanti. To celebrate the auspicious occasion, we have brought to you the history, of Purnima Tithi, crucial rituals and customs associated with the birthday of Lord Buddha. May 2022 Holidays Calendar With Major Festivals & Events: Check All Important Dates And Indian Bank Holidays for The Month.

The cultural festival commemorates the birth of Prince Siddharta Gautama, who later became the founder of Buddhism and was recognised as Lord Buddha. In South and Southeast Asia, the Buddha Jayanti is celebrated as part of Vesak when devotees dress in white clothes and give out kheer made up of mixing rice and milk as prasad. Also, people visit temples, take part in religious discussions, recite Buddhist scriptures and perform meditation.  It was only in May 1950 when Buddha Purnima was formalised, at the first conference of the World Fellowship of Buddhists in Colombo, Sri Lanka. That day the observance was officiated as a celebration during Vesak. Buddha is born as Prince Siddharta Gautama, in Lumbini, Nepal. The holy symbol of Buddha Purnima is the Dharmachakra or Dharma, which has eight spokes representing the noble eightfold path of Buddhism. Whereas the wheel represents Lord Buddha's teaching and lessons on the path to enlightenment.

(The above story first appeared on LatestLY on May 09, 2022 08:10 PM IST. For more news and updates on politics, world, sports, entertainment and lifestyle, log on to our website latestly.com).