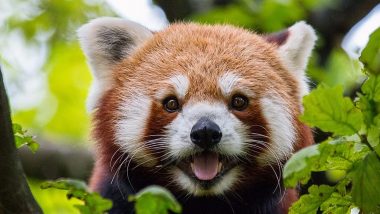 It is International Red Panda Day today. Marked on the third Saturday of September, this day is dedicated to raising awareness about these animals. When we say panda, we assume the big black and white bears but red pandas are not related to the giant pandas at all. Red pandas are much smaller and size of a regular cat. They love in the trees of the Himalaya mountains but because of the growing deforestation their populations are endangered. They live in the colder climates and have a popularity in Asia too. Do you now there are some places in India too where you can sight the red pandas. On this International Red Panda Day 2020, we give you a list of places where you can spot these animals. Since they live in cold, mountainous regions most red pandas in India are spotted in forests of Arunachal Pradesh, Sikkim, Meghalaya and West Bengal. Loved Viral Pics of Rare Black Panther by Shaaz Jung? From Kabini Forest in Karnataka to Tadoba in Maharashtra, 5 Wildlife Sanctuaries in India to Spot the Elusive Black Panthers.

The Khangchendzonga National Park is one of the highest biosphere reserves in the world. It has one of the best trekking trails and a good density of bamboo belt in here, which makes it popular for Red Panda habitat. Some of the other animals you can see here are snow leopard, Himalayan black bear, Tibetan wild ass and Himalayan blue sheep.

Singalila National Park in West Bengal also lies at a higher altitude and a forest area that spans across 78 kms. It is known for exotic bird spotting and has a population of over 40 red pandas. It is one of the famous spots to visit around Darjeeling.

Neora Valley National Park is situated in Kalimpong, West Bengal. There are many unexplored hills here which give shelter to the red pandas in the area. It is connected to Pangolaka Wildlife Sanctuary which makes their sighting more likely. The best time to visit her is from September to June.

Namdapha National Park is among the richest areas of biodiversity in North East India. It has an extensive Himalayan biodiversity which includes the red pandas. You can also see other endangered species and birds if you have a careful eye. The best time to visit here is during October to April.

Nokrek National Park is situated in the Garo Hills of Meghalaya. It is considered among the best spots to see a red panda in India. It is said to be the last remaining homes of the red panda. October to May is a good time to visit here.

All of these parks are located in North Eastern India so the best to visit remains anytime except the rainy season months, as the part receives heavy rains. All the national parks are closed during these months. So if you have been wanting to see the elusive red pandas, then you can plan a trip to these places.

(The above story first appeared on LatestLY on Sep 19, 2020 08:45 AM IST. For more news and updates on politics, world, sports, entertainment and lifestyle, log on to our website latestly.com).