It consists of the fluffiest creatures to enter the Solana blockchain network that are predicted to be a crowd puller. 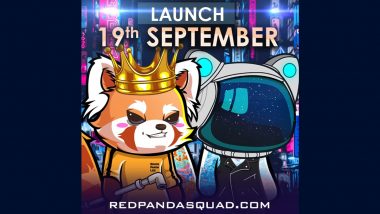 Red Panda Squad
It consists of the fluffiest creatures to enter the Solana blockchain network that are predicted to be a crowd puller.
For those familiar with the non-fungible tokens (NFTs) that occupy the crypto space must be aware of a few exciting projects like Bored Ape Yacht Club and Pudgy Penguins, and a host of other digital creations that have drawn huge attention by appearing in major media publications like NY Times. These adorable creatures have been making much impact with their powerful digital presence. Now there's a new entrant to join the army of these digital creations, titled Red Panda Squad which consist of the loveliest digital creatures ever produced to enter the Solana blockchain network.
Florida based artist JK has illustrated each Red Panda which have been algorithmically created into 10,000 distinct variations of the lovely creature. Apart from the quality art that Red Panda exudes, it is also backed by a robust, technically sound framework. The technical team behind this project has worked hard to ensure that it can handle the highest number of traffic, and they have proved themselves right by providing it with a robust back-end which is capable enough to handle enough load during minting hours.
The idea behind choosing these smart animals which dwell in the bamboo forests of the Himalayan and Heng-Duan Mountains was to bring these wonderful creatures which are on the verge of extinction to the forefront. The Red Panda Squad aims to bring these 10,000 remaining fluffy creatures into the crypto space for people to adopt. Furthermore, the RPS plans to donate $100,000 to various wildlife charity organizations that support endangered species like Red Pandas. Every Red Panda when minted earns $10 for these organizations.
The final step is to build its value within the Solana blockchain through the development of the Red Panda Squad game, where holders of the Red Panda NFT will be able to enter the metaverse to play and earn. Players can make
Red Panda friends, battle enemies, and gain experience on their panda. Users will be
rewarded with their native SPL token. The Red Panda Squad is focusing on growing the Solana ecosystem and has partnered with Mercurial Finance, which is a liquidity platform to stabilize coins on Solana. The Red Panda Squad is undoubtedly racing ahead with a fast pace to build its strong presence in the crypto world and is well-equipped to conquer the NFT space with its diverse offerings.
Comments
Tags:
NFT Space NFTs non-fungible tokens Red Panda Squad Solana blockchain
Comments
You might also like