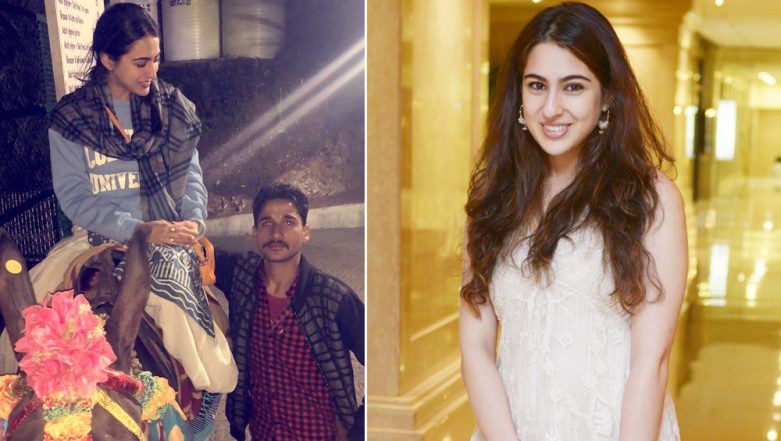 After sharing a Happy Navratri picture on Instagram, upcoming Bollywood actress Sara Ali Khan has posted a video from her Vaishno Devi visit. In her latest video, Sara can be heard talking to a man whom she addresses as Singh, presumably her guide, about the holy cave in Vaishno Devi. The man can be heard explaining religious beliefs attached to the cave.

Singh says that those who are sinners cannot enter the holy place. Sara then asks Singh whether she can enter the cave if she has sinned. She also shared a picture of her sitting on a horse with Singh standing beside her.

On Ganesh Chaturthi, she had visited temples and also distributed food and clothes among the homeless. Sara who is often snapped visiting temples, had posted a throwback picture of her standing in front of a temple. Paparazzi has multiple times spotted her at the Shani temples. She was also seen helping poor people outside the temple premises. Here's Sara Ali Khan And Sushant Singh Rajput's Unseen Picture From The Sets Of Kedarnath To Get You Excited For The Film!

Any guesses if I made it into the cave? 😈🤭🤨💁🏻‍♀️🐴 #tbt #vaishnodevi #MissingSinghJi #navratri

On the professional front, Sara Ali Khan will be seen in her debut movie Simmba opposite Ranveer Singh. The movie is slated to release on December 28, 2018. The girl also has another movie in her kitty where she will be seen opposite Sushant Singh Rajput. As per reports, Abhishek Kapoor directorial movie Kedarnath will release on November 30. Also, father-daughter duo Sara and Saif Ali Khan will appear in the first episode of Koffee with Karan Season 6. Even before the release of her movie, Sara has already gained a lot of fan following.