26 Years of Mohra: Here's Why The Super Hot 'Tip Tip Barsa Pani' Is Bollywood's OG Evergreen Song That Can Make You Feel The Monsoon Romance Even if You Are Single! 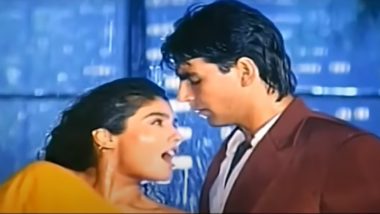 You might be into Shape of you by Ed Sheeran but you know deep down that Tip Tip Barsa Pani just hits in the feels like no other song. It has been 26 years the movie Mohra that released in 1994 and took Bollywood by storm. The super hot Tip Tip Barsa song can make your fall in love and crave for the romace even if you are single and you know that. The movie starring Akshay Kumar, Sunil Shetty, Raveena Tandon, Paresh Rawal and Naseeruddin Shah gave us this gem of a song that should be called the Bollywood Monsoon love anthem. The film was one of the biggest hits of 1994 in India and the song was a chartbuster. It is said that originally, the late Divya Bharati was signed for the film but after her sudden death, she was replaced by Raveena Tandon. Tip Tip Barsa Pani has to the ultimate evergreen monsoon song hot, romantic Bollywood songs. Here's why!

Nora Fatehi and eat her heart out. Raveena is the OG hottest diva that made the song 10 times better. Drenched in a sexy yellow saree, Raveena Tandon dancing sensuously made the song what it is.

He is a heartthrob. Akshay Kumar lives in the heart of every Bollywood fan. Although he is really known for his action stunts, you cannot deny that in this song you wished you were dancing with him instead of Raveena Tandon.

Rain can make any moment super romantic and when it is Raveena Tandon and Akshay Kumar together for a song like Tip Tip Barsa pani, words definitely fall short.

With Monsoon 2020 Knocking Our Doors, Get Into The Mood With Tip Tip Barsa Pani (Watch Video):

Well, please enjoy monsoon with this song especially if you are one of the lucky few to be at home with your romantic partner amid the coronavirus pandemic. Snuggle in and listen to Tip Tip Barsa pani.

(The above story first appeared on LatestLY on Jul 01, 2020 02:06 PM IST. For more news and updates on politics, world, sports, entertainment and lifestyle, log on to our website latestly.com).