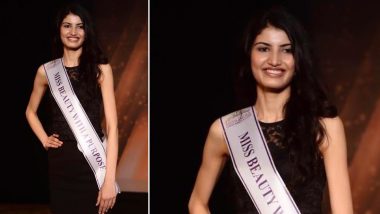 Aishwarya Sheoran, a former Miss India finalist and model has cracked UPSC civil service exam 2019. Aishwarya said she wanted to be clear the UPSC exams, so took a break from her modelling career to prepare for it. It was the model's dream to become an IAS officer. She had secured 93rd rank in CSE 2019. Out of the 829 candidates that qualified for civil services examinations, including the IAS, the IPS and the IFS, that comes under the Union Public Service Commission (UPSC), Aishwarya cleared the test. Beauty Pageant Winner Now an Army Officer, Netizens Go Gaga Over Lt. Garima Yadav’s Life Journey.

Aishwarya's journey began from Delhi Times Fresh Face, a beauty pageant where she came first. She was thereafter asked to participate in Miss India and from there she began her modelling career. The Times of India quoted her a saying, "My mother named me Aishwarya after Aishwarya Rai because she wanted me to become Miss India, and I was eventually chosen in the top 21 finalists for Miss India."

Talking about how she began modelling she said, "My launch pad was definitely Delhi Times Fresh Face 2014. From there, they asked me to participate for Miss India, so the steps kept coming one after the other and I walked through the trail, which led me into the modelling industry." Congratulating Aishwarya, Miss India took to Twitter writing, "Campus Princess Delhi 2016, Freshface winner Delhi 2015 made us immensely proud as she scored the All India Rank 93 in the Civil Services Examination. A huge congratulations to her on this achievement!"
Here's Miss India's Tweet:

Aishwarya Sheoran, Femina Miss India 2016 finalist, Campus Princess Delhi 2016, Freshface winner Delhi 2015 made us immensely proud as she scored the All India Rank 93 in the Civil Services Examination. A huge congratulations to her on this achievement!#AishwaryaSheoran #CSE pic.twitter.com/SrDu4iK6T0

Aishwarya did not take up any coaching classes to clear the exam. When asked about it she said, "I had to switch off my phone, social media, everything, to focus on the exam and the result is here. But it's not that I suddenly generated interest in studies. I was always studious."

Congratulatory Messages Poured in From Every Quarter to Aishwarya:

Fashion to Civil Services!! What a splendid journey, in full style 😎Bravo #AishwaryaSheoran, rank 93. You will inspire millions to pursue multiple and diverse interests. Welcome aboard 🙌💐#UPSC #UPSCResults @IASassociation pic.twitter.com/20MzUJnFYW

Aishwarya Sheoran was the head girl of her school and pursued further studies at Sri Ram College of Commerce. Her father Colonel Ajay Kumar is the Commanding Officer of NCC Telangana Battalion, Karimnagar. She also said, "I thought I should try for civil services for diversity in the family and the ultimate idea is to serve the nation. In the army, there are opportunities for women to grow, but it is still very limited. In civil services, there is no limit to what a woman can achieve."

(The above story first appeared on LatestLY on Aug 05, 2020 10:34 AM IST. For more news and updates on politics, world, sports, entertainment and lifestyle, log on to our website latestly.com).