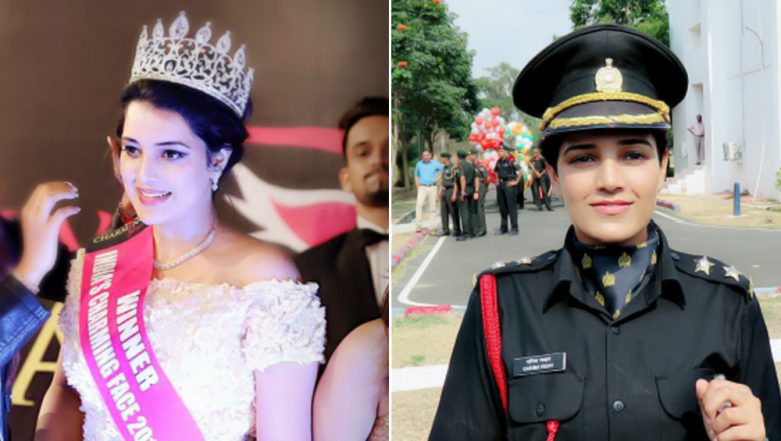 A woman can be whatever she wants to be and breaking stereotypes is just one of the umpteen things women can do perfectly. One such woman is Lieutenant Garima Yadav who went from India's Miss Charming Face to becoming an Army officer like a pro! Yadav has been the winner of Miss Charming Face Beauty Pageant, 2017 got commissioned into the Indian Army, and she is going viral on social media ever since. Modelling wasn't her first career choice, and she just happened to get into one of the pageants randomly. After completing her schooling from Army Public School, Shimla she got admission in the prestigious St. Stephen’s College, Delhi University. Although she always wanted to join the IAS, but wasn't able to clear the IAS Mains. Garima later cleared the CDS exam and joined the Indian Army where she was ranked second in the All India Rank of Officers’ Training Academy, Women.

Take a look at the picture of Lieutenant Garima Yadav that is going viral:

From Beauty Pageant Winner To Indian Army Officer Lieutenant Garima Yadav secured AIR -2 in CDS 1 2017 and joined the OTA Chennai, she got commissioned into the Army after passing out from the academy. “I am a single mother-child, and she has been there for me in all my ups and downs, motivating me, she’s a strong woman and my true inspiration I just wanted to make her proud. I am from army public school Ddagshai (Shimla) and did BA economic from St Stephen’s College New Delhi, I was preparing for civil services but I guess army was my true calling, I got recommended in my 1st attempt. Before that I was working as an MC for events as a part-time job, while preparing for exams, from there I was selected for a pageant called India’s miss charming face’s auditions, I won the pageant in November 2017 and was selected for next pageant at international level which was to b held in Italy, but I chose to join OTA Chennai instead. I had a wonderful experience at the OTA, at first it was difficult for me to cope up with the tough training, the weather was also unfavorable, I did not have very good physical standards but somehow I managed for first few months, I didn’t give up and improved drastically. I actively participated in all curriculum activities. People have a wrong conception that you have to be good at all sports, physically strong to get selected in the SSB, that’s not true, you just should be willing to accept your weaknesses and work on them, should always endeavor to get better and better every day. One should b honest, positive, creative and solution orientated that’s all you need rest everything will follow.” #indianarmy ⚔️🇮🇳❤️

Netizens are going gaga over this beautiful army officer. Take a look at some of the reactions:

What a journey! Hats off to her. #FridayMotivation pic.twitter.com/4hBLBUBTFm

You are a real celebrity #GarimaYadav .

You set an unique example.

Proud of you sister. https://t.co/FbbgQIqbH0

"People have a wrong conception that you have to be good at all sports and physically strong to get selected in the SSB. That’s not true. You just should be willing to accept your weaknesses and work on them and should always endeavour to get better and better every day," Garima said in one of the interviews.