Amul Topical of 2019: From Chandrayaan 2 Launch to Onion Price Hike, Here are Some Best Doodle Ads to Relive the Last Year of the Decade

While a lot of things may have changed, Indian dairy brand Amul's way of advertising their products through the doodled ads has remained constant. Called the Amul Topical, these doodles have celebrated achievements to birthdays, marked certain wins to the death anniversary of prominent personalities. 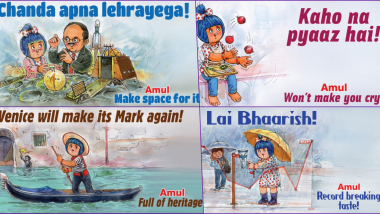 It is almost the end of 2019 and everyone is looking back at the things gone by. We welcome 2020 in three days and it is time to ponder a little upon what all interesting things we have seen this year. While a lot of things may have changed, Indian dairy brand Amul's way of advertising their products through the doodled ads has remained constant. Called the Amul Topical, these doodles have celebrated achievements to birthdays, marked certain wins, addressed global trends, social media challenges to even the death anniversary of prominent personalities. And we look at all the trends, funny memes, social media challenges and highlights of the year, why not look upon some of the best Amul Topicals of 2019? Year-Ender 2019 on The Ad World: From Dabur, Surf Excel to Zola, Viral Ads That Created Controversy This Year.

Amul Topicals this year addressed a variety of subjects. These ads celebrated India's Chandrayaan 2 mission, applauded the records of sports personalities, movies that released this year, spoke about the trending topics not just in India but globally, and made a slight comment on the issues worrying the citizens. Through their creative ads, they have always kept us entertained. So let us look at some of their best doodle ads from 2019 and what topics they were based on. Ravi Shankar Prasad Shares Amul Topical Ad on Government’s Move to Defer Spectrum Payout by 2 Years.

#Amul Topical: Winners of the 2019 Nobel for Economics! pic.twitter.com/64oiX54CFu

The Cutting of Aarey Forest in Mumbai

Give Out 'No Plastic' Message

On Scrapping of Article 370

As you can see, the dairy brand releases a doodle on almost all the trends. They have doodled on social media challenges to major political decisions which took place this year. Amul Topical has kept us all entertained with their own way of giving out a message and also promoting their products.

(The above story first appeared on LatestLY on Dec 29, 2019 03:33 PM IST. For more news and updates on politics, world, sports, entertainment and lifestyle, log on to our website latestly.com).