Year-Ender 2019 on The Ad World: From Dabur, Surf Excel to Zola, Viral Ads That Created Controversy This Year

From Dabur, Hindustan Lever to international brands like Zola, these are some of the major brands that created noise in 2019. Let's take a look at some viral ads of this year. 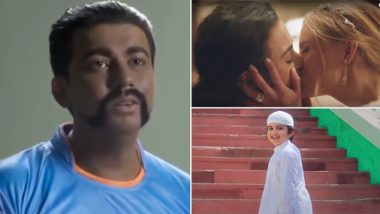 A good advertisement is one which sells the product without drawing attention to itself.-David Ogilvy.

Like every year, 2019 also saw some great works from the advertising fraternity. Among them, some caught the attention of trolls and created an unnecessary controversy. Two ads from Hindustan Lever were targetted for favouring one religion over the other.  Hashtags asking to boycott the brand started on the internet immediately. So today, in the age of aggressive social media, it has actually become a very difficult place for advertisers to express their view without the fear of getting attacked.

The internet has been like a boon for advertisers - from using the digital medium to narrate their stories without worrying about time to easily reaching out to today's audience who is always on the phone. However, it also has a negative side as a common man today holds the power to make or break a brand. Any negative comment about a creative immediately attracts the attention of several on the internet and in no time, it turns viral. Chaayos Maiden Ad Campaign #MentalAboutChai Draws Severe Criticism For Using The Word 'Mental'.

From Dabur, Hindustan Unilever to international brands like Zola, these are some of the major brands that created noise in 2019. Let's take a look at some viral ads of this year.

It has been known that thousands of elders are abandoned by their family members at Kumbh Mela. However, this harsh reality was not well accepted when it was shown by HUL. The ad showed a son who contemplated abandoning his old father in the crowd but later comes back when he realises his mistake. The ad received severe backlash with people using #BoycottHindustanUnilever products on Twitter. It apparently rubbed the sentiments of several Hindus who highlighted that the film showed their religious festival Kumbh Mela in a negative light.

Ahead of India-Bangladesh match during 2019 World Cup, Dabur had to withdraw its ad as it received immense flak for hurting the sentiments of Bengalis. The ad was criticised for allegedly mocking their culture in an attempt to take potshots at the Bangladeshi cricket team. The ad is no longer available on Youtube as well.

The #dabur ad was in bad taste and made by an agency populated by dumb, semi educated people. Now the brand faces the lash back. Goes to show how corporate mismanagement destroys a good reputation. And that too for a company with a bong connection.

The maiden commercial of Tiger Global backed tea cafe chain Chaayos was in the middle of severe controversy for its ads titled # MentalAboutchai. The ads received immense flak for using the word mental and being insensitive in their execution. Both the ads highlighted the protagonists stuck in a difficult situation, but still demanding tea of their choice.

The Holi ad of Detergent brand Surf Excel, created around the Hindu-Muslim unity theme, faced flak for the concept. The ad featured a young Hindu girl, dressed in a white t-shirt, who got stained in Holi colours in order to protect her young Muslim friend who has to go to the nearby mosque to pray. The ad was part of the 'daag acche hain' (stains are good) series. It faced the wrath of the users who felt that it was "Hindu phobic with an aim to show that Namaaz is more important than Holi." The ad was criticised by using hashtags like #BoycottSurfExcel.

Wedding planning website Zola was not allowed to run its advertisements on the Hallmark Channel after the network removed four commercials that featured a lesbian couple kissing each other. The controversy around the ads started after One Million Moms, a division of the conservative American Family Association, urged the channel network to not air ads featuring same-sex couples.

The channel stopped airing the ads featuring the same-sex couples, while it continued to air the other two ads that didn't include lesbians. Hallmark came under fire and it soon issued an apology stating that it was a wrong decision which they took. In a statement, it said, "We are truly sorry for the hurt and disappointment this has caused.”

Pakistan's Jazz TV created a spoof of Wing Commander Abhinandan Varthaman during the 2019 World Cup in response to Star Sports ad which showed an Indian supporter describing himself as Pakistan's 'Abbu' (Father). Both these ads were criticised and it was considered that they were against the ethics of the sport which is referred to as the 'gentleman's game'

As the year 2019 comes to an end, let's hope and pray for a world where the wings of creativity won't be clipped on the basis of faith, religion and sex. LatestLY wishes all its readers a Very Happy New Year 2020.

(The above story first appeared on LatestLY on Dec 28, 2019 11:00 AM IST. For more news and updates on politics, world, sports, entertainment and lifestyle, log on to our website latestly.com).