The emoji sparked varying reactions from Twitter and is being widely shared on Twitter. And Twitterati was quick to create funny memes and jokes surrounding the emoji trend. 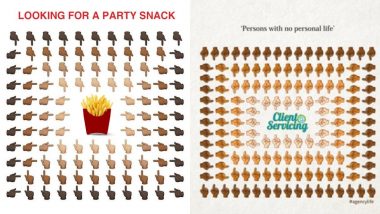 The latest trend to captivate audiences on social media is finger-point emoji. The emoji meme went so viral that even MP Tejasvi Surya shared it on Twitter. The format is quite simple but the pattern has hooked internet users like anything. The emoji sparked varying reactions from Twitter and is being widely shared on Twitter. And Twitterati was quick to create funny memes and jokes surrounding the emoji trend. Soon, brands also joined the bandwagon making people laugh their hearts out. After the trend began on Twitter, people don't seem to have any calm, with people making funny memes on it. How to Make Finger Point Emoji Memes? Latest Meme Trend Has Twitterati Making Most of Racial Representation Emoticons.

Finger Point Emoji is nothing but a group of fists in varying skin shades pointing at a particular thing in the middle. We are not sure how the emoji trend began on Twitter, but social media users are currently obsessed with it. While some showcased their love for food through the emoji trend, others took used it to share inspirational quotes and motivational thoughts. Meanwhile, some used it raise awareness about health, nutrition, women safety and other social issues and pressing topics.

As it's #Trending , wanna share the ultimate line one should realise in life. One liner I always quote and tell people through social media. #MantraForLife #fingerpointemoji pic.twitter.com/REgKtYBiXp

When You Want to be Different!

Let's Give Fries The Deserved Attention!

Anything and anyone can go viral on social media in no time. The finger point emoji is the latest trend that is keeping the internet engaged. Do let us know what you think about the social media trend and share your thoughts in the comment section below.

(The above story first appeared on LatestLY on Nov 18, 2019 10:16 AM IST. For more news and updates on politics, world, sports, entertainment and lifestyle, log on to our website latestly.com).