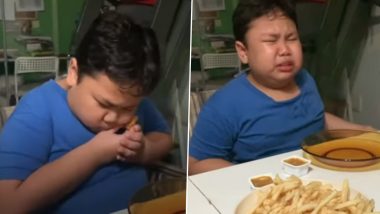 A heartwarming video of an autistic boy crying after his mother got his first McDonald's meal following lockdown in Singapore has gone viral on social media platforms. In the clip, the nine-year-old can be seen crying happy tears after eating chicken nuggets and french fries. McDonald's opened in Singapore on May 10 after closing for weeks together. The video has since then gone viral garnering positive reactions on social media. From Stopping a Crying Baby to Hiding From Them While Working, Funny Videos of Parents and Kids During Quarantine Are Too Cute To Miss!

The video begins with the mother sitting in the car. She says, "I'm [getting] McDonald's. It's a surprise!" She takes him to the kitchen where the food is kept on the table. In the beginning, Adam thinks his mom is playing some prank and begins crying. He says, "I thought you wanted to scare me" and hugs her. She then shows him what she bought for him. She can be heard saying, "I didn't want to scare you! I wanted to surprised you. Look, what is it?" The video went viral after she shared it on Facebook. She also mentioned that her son has sensory sensitivity and mild autism that caused his 'overreaction.'

Boy Cries After Mom Buys Him First McDonald's Since Lockdown:

In the video can be seen crying holding the chicken nuggets to his chest. He thanks his mother while crying who in return tell him to thank God for the food. He says, "Thank you Allah" and can be seen biting into a fry. She added that McNuggets with fries and ice cream was Adam's favourite meal. She also said that her son has sensory sensitivity and mild autism that caused his 'overreaction.'

(The above story first appeared on LatestLY on May 27, 2020 06:40 PM IST. For more news and updates on politics, world, sports, entertainment and lifestyle, log on to our website latestly.com).