For tigers, there are no borders, so the ones on the Bangladesh side of the Sundarbans in Khulna district keep straying into the West Bengal end of these extensive stretches of mangrove forests, which are among the largest in the world and a UNESCO World Heritage Site. 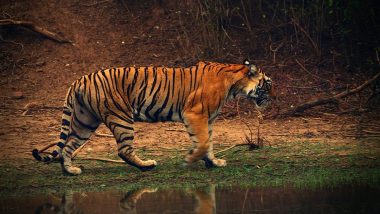 Sundarbans, May 16: The issue of infiltration from Bangladesh may keep raising the political temperature from time to time, but there's one movement into the West Bengal end of the Sundarbans from India's eastern neighbour that doesn't raise hackles, for these are male tigers that come looking for female companionship on the Indian side.

For tigers, there are no borders, so the ones on the Bangladesh side of the Sundarbans in Khulna district keep straying into the West Bengal end of these extensive stretches of mangrove forests, which are among the largest in the world and a UNESCO World Heritage Site. West Bengal Tourist Attractions: Sundarbans, Darjeeling, Kolkata & Other Top Places to Visit in The State

These are usually lonely males seeking female mates, according to local forest guards who monitor their movements closely so that their influx doesn't intensify animal-human conflicts that are rampant in the region. Since January this year, the forest department has recorded four such instances of straying.

Throwing light on the phenomenon, West Bengal's Forest Minister, Jyotipriya Malik, said these tigers from Bangladesh usually show up on the Indian side during the mating season, which falls between November and January. And because humans and tigers live cheek by jowl in the Sundarbans, the striped visitors tend to stray into the villages. Royal Bengal Tigers Becoming Extinct! Big Cats In Sunderban May Not Survive Global Warming, Says UN Report

Soma Sorkhel, who has been studying the big cats of Sundarbans, added that one of the reasons for the straying of tigers from Bangladesh might be the fights that take place among male tigers over a female they fancy. Generally, the male tigers who lose the battle of possession have to leave the area after the fight is over. So they enter the villages on the fringes of the forest.

In one such instance, a male tiger entered Mathurakhand village near the forest compartments of Pirkhali II and III on the fringes of the tiger reserve area late on a January night and killed a couple of cows and buffalos.

With the help of the villagers, forest department officials traced the presence of the tiger following its pug marks and surrounded the area in the thick mangrove forest from all sides with nylon nets.

The officials have also been trying to establish the pattern of movements of these big cats. They lay traps with baits to capture the stray tigers. On occasions, they contemplate playing audio recordings of the roars of female tigers or using tranquiliser guns, but the strays are hard to pin down.

Biswajit Das, the Sajnekhali tiger reserve range officer, points out that a tiger who has been weakened by a fight is not capable of hunting in the dense forest, which requires physical strength, so it turns to the villages to find easy prey.

The Sundarbans villagers, too, have enabled the strays unwittingly. During the second wave of the Covid-19 pandemic, a number of them had returned from cities after losing jobs. Back in their villages, they had no option but to extract the resources of the forests to support their families.

In many places, they tore down the protective fencing to ease their entry into the forests, but in the bargain, they made it easier for the tigers from the other side of the border to come in.

The 2022 national census of tigers started in the first week of December 2021. The report is much awaited, for it will confirm if the number has further increased, which the villagers may not consider to be good news, and the extent of infiltration in the mating months.

(The above story first appeared on LatestLY on May 16, 2022 09:54 PM IST. For more news and updates on politics, world, sports, entertainment and lifestyle, log on to our website latestly.com).