Dog Flies Down Stairs to Impress Owner And Lands Down With a Loud Thud, Hilarious Video Goes Viral

Video of a bull almost flying down a flight of stairs has gone viral on social media platforms. Trying to impress its owner, the pup named Tank jumps or rather fly down the stairs. 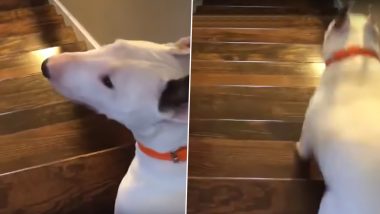 Video of a bull almost flying down a flight of stairs has gone viral on social media platforms. Trying to impress its owner, the pup named Tank jumps or rather fly down the stairs. The hilarious moment went viral after it was posted on Twitter by user @BraydenBushaw. The video begins with the dog's owner asking if it wants to go down the stairs making Tank run at light speed and return to the same point. She can be heard asking, "Wanna go down? Wanna go downstairs?" However, despite the effort, the dog falls down and we are happy its bones are intact. Instagram Star Pet, Oliver the Dog Is so Cute That He Is Always Mistaken for a Fluffy Teddy Bear! These Paw-dorable Pictures Are a Proof.

But the magic moment unfolds when the pup decides to fly down the stairs terrifying the owner. @BraydenBushaw posted the video with the caption, "This dog is broken." Initially, Tank runs down into the bedroom on the second floor and then sprints to the stairs and eventually takes a plunge from the top to the bottom. Worriedly, the woman says 'Hey!'but what the dog only wants is to impress the owner.

Dog Flys Down a Flight a Stairs:

Talking to Newsflare about their dog's stunt, the owner said, "His new trick was running up and down the stairs. Our house is two-story and we just don't go up there much. He was doing great. Then he just decided to go airborne for no reason!"  The video was quick to go viral on social media platforms collecting thousands of likes and comments.

(The above story first appeared on LatestLY on Dec 10, 2019 09:04 AM IST. For more news and updates on politics, world, sports, entertainment and lifestyle, log on to our website latestly.com).