Video of American conservative political commentator Tomi Lahren is going viral. She thanked Indians for the support saying Trump is as wise as an owl and in an attempt to reach out to the Indians, she translated it into Hindi. Tomi, unintentionally called Trump an "Ullu", colloquially used to refer to a person as 'stupid'. 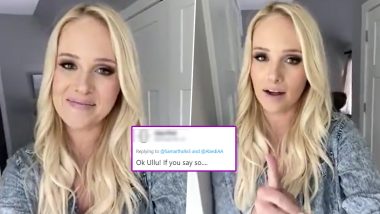 As the United States is heading for elections, Trump supports and anti-Trump Twitterati is busy sharing their opinions. As the air is filled with political thoughts in the country, video of American conservative political commentator and former television host Tomi Lahren is going viral. She posted a video on social media thanking Indians for supporting Donald Trump, the current American President. In the video, she said that Trump is as wise as an owl and in an attempt to reach out to the Indians, she translated the statement into Hindi. Tomi, unintentionally called Trump an "ullu", the Hindi and Urdu word for owl. While it is the right word, in Hindi "Ullu" is colloquially used to refer to a person as 'stupid' or 'dumb'. Her video with the howler has now gone viral on the internet with desi people laughing how the woman, a Trump supporter ended up calling him 'ullu'. Donald Trump's Orange Face Becomes Target of Funny Memes and Jokes, US President Tweets It's Fake But Says 'Hair Looks Good'.

In the short video, she says, "Because President Trump is wise as an owl, or as you guys would say in Hindi – I hope I’m pronouncing this right – President Trump is wise like an ‘ullu’. I hope I said that right." The address to the Indian diaspora did not go down well with Twitterati sharing hilarious responses to the video. Photo of US President Donald Trump Facing Germany Chancellor Angela Merkel and Other Leaders at G7, Image Inspires Funny Memes on Twitter.

My fellow Indians, Tomi Lahren thanks you for your support for Trump and his MAGA agenda.

Tomi lahren: President trump is Wise like an ulloo.

@TomiLahren owl is considered wise precisely according to ancient folklore.

People Have a Lot of Ideas!

Why Indians Don't Refer to People as Ullu Unless to Insult:

Which is perfect because in India, Ullu or an owl is used to describe a foolish person.

Do You Think So?

I have a feeling someone did this intentionally 😂.

Which raises a bigger, never thought about earlier question.. Why r Owls considered wise but not Ullus?

😂😂😂😂😂 Made my day. Suddenly birds are flavour of the season.

Tomi was thanking the Indian community in the US for supporting President Donald Trump's 'Make America Great Again' and his 'Keep America Great' agenda for the 2020 polls, when she made the statement. Tomi Lahren first made her name on Glenn Beck’s The Blaze TV channel.

(The above story first appeared on LatestLY on Aug 25, 2020 03:43 PM IST. For more news and updates on politics, world, sports, entertainment and lifestyle, log on to our website latestly.com).