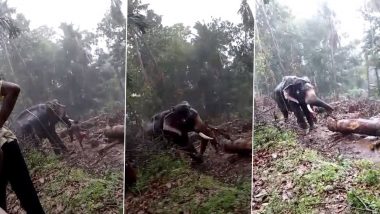 Thiruvananthapuram, May 10: After photos and videos of an emaciated elephant named Thekkumkandathilu Parameswaran used for logging went viral on social media, People for the Ethical Treatment of Animals (PETA) India has urged Kerala Chief Minister Pinarayi Vijayan to intervene and direct the forest department to rescue and rehabilitate the animal immediately. Elephant Dies in Chhattisgarh, Herd of Elephants Gather Around Dead Body in Surajpur, Carcass Yet to Be Retrieved by Forest Department.

Video footage shows the reluctant bull elephant being forced to haul a heavy log. In a complaint to the Kerala chief minister, PETA India pointed out numerous violations of animal protection laws - including the Wild Life (Protection) Act, 1972; The Prevention of Cruelty to Animals Act, 1960; and the Kerala Captive Elephants (Management and Maintenance) Rules, 2012 - as well as central government guidelines with respect to keeping and using an unfit elephant like this one for work. Pregnant Elephant and Male Calf Found Dead in Assam’s Karbi Anglong, Poison Suspected.

"The state of this emaciated elephant is another reminder that it's impossible to meet the needs of these wild animals in captivity," says PETA India Chief Executive Officer Dr Manilal Valliyate. "Malnourished, wounded, visually impaired, and distressed elephants are often forced to work, give rides, or participate in ceremonies, and many of them retaliate, putting human lives at risk. Cruelty to elephants needs to stop, for everyone's sake." Parameswaran's abuse highlights the plight of elephants used for logging, begging, rides, ceremonies, and other purposes in India. Frequently controlled through beatings and prodded and gouged with weapons, they often suffer without veterinary care or adequate nutrition. Many have painful foot rot and leg wounds from being chained for long hours.

They also commonly show physical signs of severe psychological distress - such as swaying, head-bobbing, and weaving - behaviour not seen in healthy elephants in nature. Frustrated captive elephants commonly harm or kill their mahouts or others around them. According to figures compiled by the Heritage Animal Task Force, captive elephants killed 526 people in Kerala in a 15-year span. Animal Welfare Board of India inspections and PETA India investigations reveal that most elephants in captivity in the country, including in Kerala, are being held illegally or have been transported to a different state without permission.

(The above story first appeared on LatestLY on May 10, 2022 01:51 PM IST. For more news and updates on politics, world, sports, entertainment and lifestyle, log on to our website latestly.com).