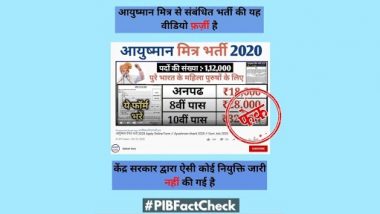 New Delhi, October 30: A viral YouTube video is being shared on social media platforms claiming that 'Ayushman Mitra Recruitment 2020' has been announced on the website of 'Ayushman Bharat'. The video is being widely shared on social media platforms including Twitter, Facebook and WhatsApp, triggering confusion among people. The Ayushman Bharat Pradhan Mantri Jan Arogya Yojana is a scheme of the Government of India to provide free access to healthcare for 40% of people in the country. People using the program access their own primary care services from a family doctor. Kisan Vikas Mitra Samiti (KVMS) Providing Jobs Through Website Under Ministry of Agriculture? PIB Debunks Fake News.

Fake news has been spreading like wildfire, especially after the coronavirus outbreak. The government has advised people not to believe in such fake news and rumours. Several initiatives have been taken by the government to curb the spread of fake news by doing a fact check of the fake and misleading information on digital platforms.

This claim is fake. No such announcement has been made on the website of Ayushman Bharat.

(The above story first appeared on LatestLY on Oct 30, 2020 10:44 AM IST. For more news and updates on politics, world, sports, entertainment and lifestyle, log on to our website latestly.com).