Fact Check: Over 24,000 Deaths in China Due to Coronavirus? Doctored Screenshot Claims Under-Reporting of Fatalities, Know Truth Behind Viral Post 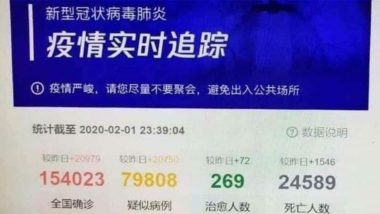 Wuhan, February 7: A recent screenshot leaked by Chinese news site Tencent caused panic after it claimed that the number of deaths due to the dealy Coronavirus stood at 24,589, as opposed to the official death toll given by the Chinese government. While the Chinese government's death figure stands close to 600, the screenshot by Tencent showed a much higher figure, which sparked talks of the Chinese authorities grossly understating the death toll due to the deadly Coronavirus. So what's the truth behind the Tencent death figure and is China really under-reporting deaths due to Coronavirus outbreak? Fact Check: ‘Arsenicum Album 30’ Homeopathic Medicine, Recommended by AYUSH Ministry of India To Cure Coronavirus Infection As Claimed? Here's The TRUTH!

Claim: Tencent is China's largest online news site and the leaked screenshot, which was later claimed to be doctored, showed the number of infected people in China at 1,54,023 and the death figure at 24,589. China Issues Order for Disposal of Coronavirus Fatalities, Says Dead Bodies Should Be Cremated and Not Buried to Prevent Risk of Transmission.

Check the Screenshot Below 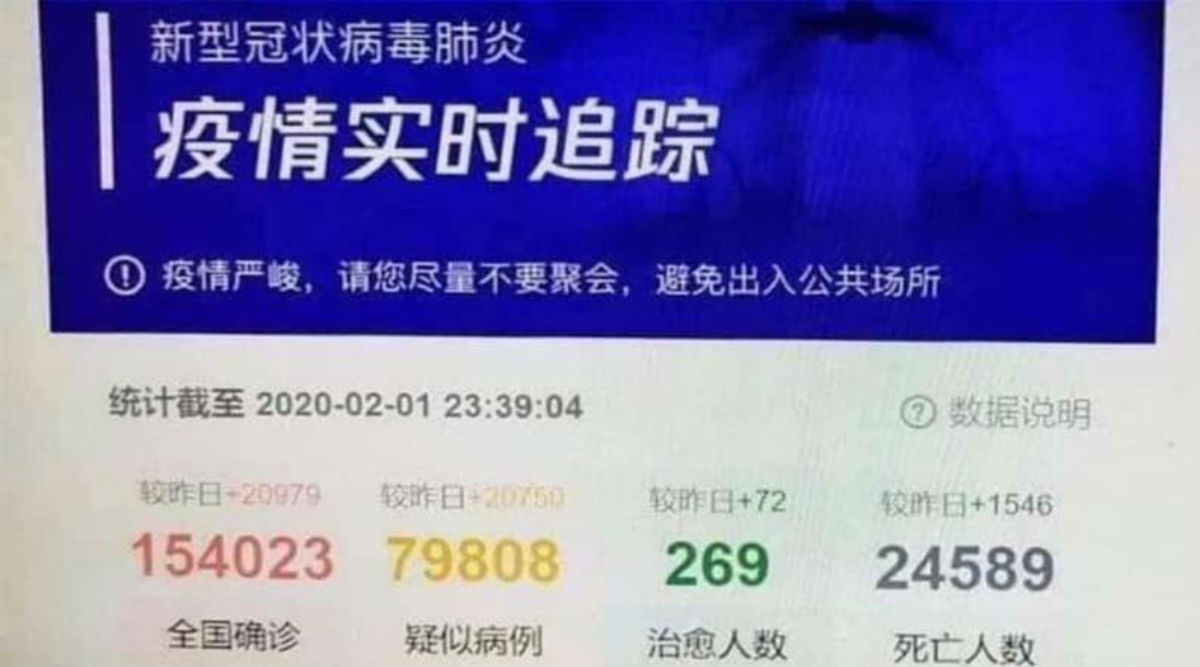 BIG News coming from China - Tencent Holdings tracker just reported 25000+ Deaths & 1.5 Lakh active infections from Corona Virus. Chinese authorities have claimed just around 500 deaths! If the tracker is true, this is not only a virus outbreak but a massive epidemic.

Truth: Tencent clarified in a tweet that the numbers attributed to it are false and that the image doing rounds on social media sites and digital news portals were doctored. "Unfortunately, several social media sources have circulated doctored images of our 'Epidemic Situation Tracker' featuring false information which we never published," said Tencent in its tweet.

"The Tencent News 'Epidemic Situation Tracker' reports real-time data from China' s National Health Commission and various Municipal Health Commissions across China. It is one of several Tencent initiatives, including "Tencent Health" and "Rumour Filter", that keep users informed and up to date on new developments relating to the novel Coronavirus epidemic and check on hearsay versus fact shared by over 170 authoritative information sources across China," informed the social media platform.

Therefore, the claim that Tencent put out a screenshot saying that the deaths due to Coronavirus outbreak were 24,589, much higher than the figure given by the Chinese authorities are false. Though there are talks about China underreporting the number of casualties, there is no evidence to the fact that the deaths due to Coronavirus is more than what Chinese health agencies and government has mentioned.

The number of deaths due to the dealy Coronavirus stood at 24,589, as opposed to the official death toll given by the Chinese government.

The claim that Tencent put out a screenshot saying that the deaths due to Coronavirus outbreak were 24,589, much higher than the figure given by the Chinese authorities is false.

(The above story first appeared on LatestLY on Feb 08, 2020 12:40 AM IST. For more news and updates on politics, world, sports, entertainment and lifestyle, log on to our website latestly.com).