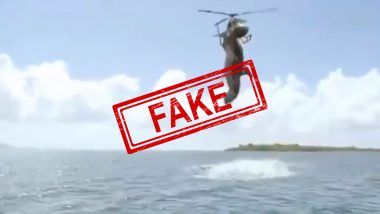 Social media can be an interesting place at times. While we get all our updates about what is happening around the world, it also shows us things that we have never seen before, like a helicopter being attacked by a shark? No, we are not kidding, a video clip is going viral on Twitter which shows a helicopter flying over an ocean being attacked by a shark as it jumps out of the water. No, you don't have to freak out as it is a clip from the movie. However, the tweet mentions that it is a "rare video" for which National Geographic paid 1 million dollars to purchase! No, that is not true, we tell you the truth behind this viral clip. Flying Sharks? Osprey Bird Caught Preying on a Big Fish on South Carolina Beach, Twitterati is Amused (Watch Viral Video).

A 14-second clip has been shared on Twitter by a user @RatanKAgrawal. The clip shows a group of waiting on a ship and a helicopter probably coming to rescue them. But as it comes lower, a shark jumps out and takes it down into the water. If you look carefully, it is understood it is a work of special effects and part of some series or a movie, but some people may believe it to be real. The claim along with the video states, "National geographic channel has paid 1 Million Dollar for this rare video..What a video". Let us tell you, it is from the movie trailer of 5-Headed Shark Attack which released in the year 2017. 'Three Eyed Boy in Germany'? Video of Three-Eyed Baby Born in Germany Is Fake, Here’s Fact Check to Find Truth Behind the Viral Clip.

Watch The Viral Video of Shark Attacking a Helicopter:

Another User Called it Dangerous

Incredible footage of a shark leaping out of water and grabbing a helicopter ... Extremely Dangerous 👇😥😓@newworlddd555 @myworld2121 pic.twitter.com/I3h8LFTZWq

In 2017, there was a movie named 5-Headed Shark Attack, which showed a mutated monster fish terrorizing the beaches.

The last few seconds of the trailer are the exact same clip which is going viral claiming to be a real clip. Let us tell you, it is also a very common format to pass on fake videos with the claim that NatGeo has paid millions of dollars to purchase it. Now, most aware people may figure that the shark clip is fake and not a real scenario. But for those who may believe it at one glance, it is not true. It is from a movie. So if you get this clip or see it being passed along on social media to induce fear, bring them to notice these facts.

It is a fake claim. The video is part of a movie trailer.

(The above story first appeared on LatestLY on Jul 16, 2020 01:49 PM IST. For more news and updates on politics, world, sports, entertainment and lifestyle, log on to our website latestly.com).