Lulu, eight-year-old border collie dog is now worth $5million. The pet, who lives in Nashville, Tennessee got her paws on the enormous sum after her businessman owner, Bill Dorris reportedly died aged 84, in November, 2020. 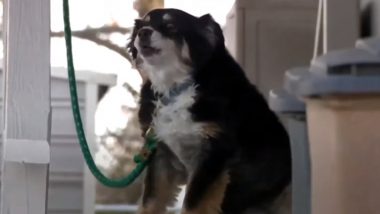 Leaving millions of dollars to a pet is a pretty grand gesture that has been done many times over the years. There are many doggos and cats out there who owns a fur-tune! Some earned through their fame; others had money willed to them by their wealthy owners. An eight-year-old border collie dog named Lulu seems to have joined the list of wealthy dogs. She is now worth $5million. The pet, who lives in Nashville, Tennessee got her paws on the enormous sum after her businessman owner, Bill Dorris reportedly died aged 84, in November, 2020. The video shows the rich doggo, and Martha Burton, who is now the goob boi’s caretaker.

Animals are adorable, and without a doubt, they go viral no matter what. And some of them are extremely rich! Do you remember the internet’s favourite, Grumpy Cat? Well, as per reports, her net worth is too in millions. She earned through her social media fame. Again, there are pets who had money willed to them by their owner. If you own a pet, you might have thought of what would become of him/ her if eventually, you are no more. Who will feed them like you have been doing, ensures he has sound health, happy and overall care? This is the reason, why some people such as Bill Dorris will get a huge amount of money for their dogs.

“Five million dollars will be transferred to a trust to be formed upon my death for the care of my border collie, Lulu,” the will reads, as noted by the News Channel 5. Dorris made the decision before passing away last year at 84 with no wife to whom he could bequeath his massive holdings. Lulu will be placed under Martha Burton's guardianship, who cared for the pooch reportedly during Dorris’ frequent business trips.

The will permits Burton to reimburse for reasonable monthly expenses. It is unclear what will happen to any money left when Lulu passes away. Meanwhile, the biggest inheritance ever is believed to a German shepherd called Gunther III, inherited $80 million from German Countess Karlotta Liebenstein.

(The above story first appeared on LatestLY on Feb 14, 2021 11:41 AM IST. For more news and updates on politics, world, sports, entertainment and lifestyle, log on to our website latestly.com).