A 25-year-old San Francisco man - Param Sharma - notorious for posting videos of himself riding in the backseat of his Tesla operating on autopilot was seen back on the road shortly after being arrested on two counts of reckless driving. 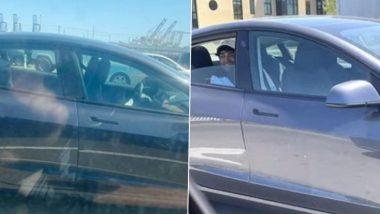 A 25-year-old  San Francisco man - Param Sharma -  notorious for posting videos of himself riding in the backseat of his Tesla operating on autopilot, was seen back on the road again repeating the same stunt, shortly after being arrested on two counts of reckless driving. When asked by KTVU, who he met up for an interview shortly after the arrest, if he'd purchased a new Tesla after the first one was impounded by the police, the Indian-American said, "Yeah, I’m rich as (expletive). I’m very rich."

The ink from his arrest record probably wasn't even dry yet when Sharma just after being released from jail committed the same crime that he was arrested for over the weekend -  sitting in the backseat of a Tesla Model 3 operating on autopilot.

The Indian-American, on the first day of his release, drove up to the Tesla dealer and bought a new car and proceeded to demonstrate how quickly he can move from the front seat of the wheel to a back seat on the same day.

And he was generous enough to update the world!

The California Highway Patrol posted his arrest on Facebook over the weekend and said, "The California Highway Patrol (CHP) has been made aware of an incident involving a man riding in the backseat of a Tesla travelling on Bay Area roadways, with no other person being seated in the driver seat. The CHP received a report of the incident as third-hand information, and it is under investigation. Safety for all who share our roadways is the primary concern of the CHP."

CHP MADE AWARE OF AN UNUSUAL INCIDENT INVOLVING A TESLA

The California Highway Patrol (CHP) has been made aware of an...

Posted by CHP - Golden Gate Division on Saturday, 8 May 2021

This is not the first time Param Sharma has touted his lavish lifestyle for all the world to see. He is quite a regular poster on Instagram where he goes by the username - goldcollarlavish. His short bio reads, "I’m a gold collar u a blue collar 25 left the pandemic richer than ever before."

Here are few posts that scream of his privilege

He did it again: Sharma back behind the seat right after being arrested

By California Law, someone should be behind the steering wheel at all times in an auto-pilot car since Tesla has warned against its misuse again and again. The electric car manufacturer's website states,  "Autopilot is a hands-on driver assistance system that is intended to be used only with a fully attentive driver. It does not turn a Tesla into a self-driving car." So even in auto-pilot, someone should have their hands on the wheel at all times. However, Sharma appears to have been busy counting his wealth, so he missed the memo.

(The above story first appeared on LatestLY on May 13, 2021 01:15 PM IST. For more news and updates on politics, world, sports, entertainment and lifestyle, log on to our website latestly.com).