Instagram Down Funny Memes and Jokes Take over as Netizens Rush to Twitter to Vent Their Frustration in the Most Hilarious Way! 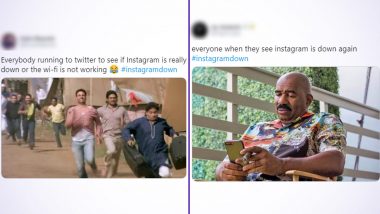 Yet once again, Facebook and Instagram wad down a few hours ago and people cannot seem to get enough of the funny memes and joke. Netizens rush to Twitter to vent their frustration after they were unable to access their account. The outage of the popular social media platforms made way for funny memes and jokes on Twitter and it the best thing you will see today. It is weird that even situations like this when you are frustrated because your favourite social media app is not working, you think of making memes!  Facebook to Combine Messenger, Instagram Chats in New App.

Facebook and Instagram were down late last night, and users were receiving an error message saying "Sorry something went wrong, we're working on it and we'll get it fixed as soon as we can". Along with the message displayed on the screen of users, many people were finding it difficult to log in and even use any of the features of both the apps. But you know the drill whenever something like that happens, whether it is Gmail down or Instagram or Facebook down, people rush to Twitter for memes and jokes, unless it is Twitter down, then probably netizens sit and pray to the social media gods or something. LOL. Take a look at some of funny #IsntagramDown memes and jokes:

Everybody running to twitter to see if Instagram is really down or the wi-fi is not working 😂 #instagramdown pic.twitter.com/FkexafhQ8z

Me trying to refresh my feed on Instagram rn #instagramdown pic.twitter.com/BwR63ZKsb0

That's All of Us!

Me taking my bougie ass to Twitter to see what in ghetto hell is going on #instagramdown pic.twitter.com/pKarzLv2JQ

everyone when they see instagram is down again #instagramdown pic.twitter.com/5Z4DnTK1nX

Well, aren't these hilarious. While we still cannot stop ROFLing let us tell you that the issue is resolved now. Both the social media platforms are working just fine, but it is the funny memes and jokes that are still winning hearts on Twitter!

(The above story first appeared on LatestLY on Sep 18, 2020 09:08 AM IST. For more news and updates on politics, world, sports, entertainment and lifestyle, log on to our website latestly.com).