The recent viral trend is called “Invisible Challenge,” is hilarious and awesomely adorable to ignore. Humans spread clear plastic wrap across the doorway and wheedle their pups into running face-first to the invisible wall. While some wanted to fool their pets, others sought to see if their dogs are actually smart enough to figure out the trick. 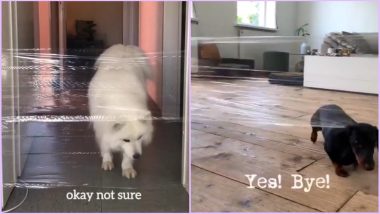 Remember the "What the Fluff Challenge"? The trend went viral last year, making the pets go crazy. Something similar that boggles doggos' minds is trending once again. Here, the owners are not playing peek-a-boo, but spreading a plastic wrap across the doorway, freaking innocent puppers out. The recent viral trend is called “Invisible Challenge,” and it is hilarious and adorable at the same time. If you haven’t seen the videos of the perplexed pets, we have compiled a few videos for you. #WhatTheFluffChallenge Viral Videos: Dogs Are Adorably Freaking Out as Owners Play Peek-a-boo!

After the "What the Fluff Challenge, where dog parents held up blankets and watch their pets panic as they disappeared, comes the "Invisible Challenge." Humans spread clear plastic wrap across the doorway and coax their pups into running face-first to the invisible wall. While some wanted to fool their pets, others sought to see if their dogs are actually smart enough to figure out, how to overcome such an obstacle. The reactions are hilarious and superbly adorable! Invisible Challenge: Inspired by Netflix Show’s Fake Magic People Are Making Siblings Believe They Vanished.

Watch it Till the End

This is the best challenge ever pic.twitter.com/l5bngFIgDF

Treat for the Smarty

tried to do the #invisiblechallenge with Heidi but she’s too smart pic.twitter.com/Sd8lBssh3U

The #invisiblechallenge you can't fool Loulou ... bye! How will your dog/cat/bunny react to this? pic.twitter.com/RvMTUX61oM

Not everyone is amused looking the way, the loyal dogs are being treated. Some are hoping to see some human fails in the same trick as justice for the brave and beloved man’s best friends.

Who else is waiting for someone to jump over the plastic wrap and bust their ass...just me? #invisiblechallenge pic.twitter.com/QyMw2kCqlY

Although, it is a bit unfair setting for the dogs, the collection of videos coming out of Invisible Challenge are adorable to make you fall in love with them a little more. The tragic betrayal is more a series of funny, cute and hard to look away, no matter how cruel or unnecessary the challenge might seem. It is an adorable challenge set around the innocent furry friends.

(The above story first appeared on LatestLY on Jul 04, 2019 10:00 AM IST. For more news and updates on politics, world, sports, entertainment and lifestyle, log on to our website latestly.com).