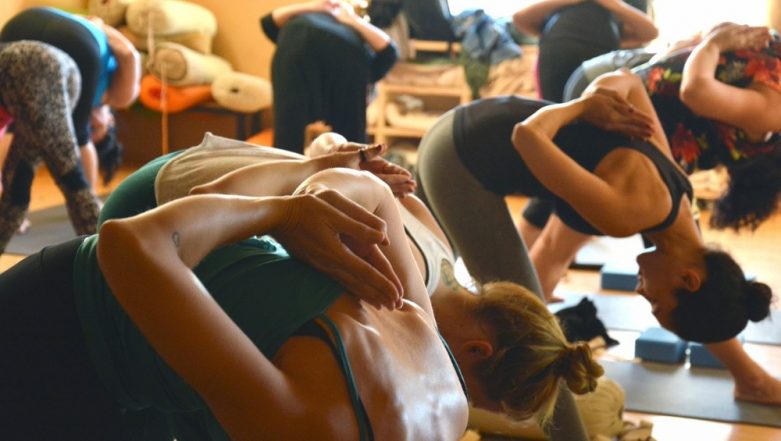 Iranian authorities have arrested around 30 people at a private yoga class in the northeastern city of Gorgan for 'inappropriate outfits'. The officials were tipped off by an Instagram advertisement. The incident comes after social media accounts of three prominent Iranian street musicians were apparently seized by authorities in the country for publishing "criminal content". According to Tasnim news agency, a local justice department official said that both men and women who were practising yoga in a private home were arrested. Iranian Female Photojournalist Parisa Pourtaherian Praised on Twitter for Covering Men's Football Match.

Massoud Soleimani, deputy chief of the city's Islamic Revolution Court, told the agency that those who were detained were wearing "inappropriate outfits" and had "behaved inappropriately". He also said that yoga instructor did not have a license to run the class. The official further said that the security forces had been keeping a watch on the house for quite some time before making the arrests. Iranian Women Disguise as Men to Watch Football Match at Azadi Stadium as Country's Regressive Law Continues.

Soleimani said the advertisements of the yoga class on Instagram criticised the "lack of surveillance of activities" on social media in the country. In Iran, its conservative Islamic authorities do not allow mixed gender sports. While yoga is not officially banned in Iran, teaching it professionally is not allowed. Yoga as a health practise frequently receives criticisms from religious hardliners in the country. While there are restrictions, various yoga schools publicly advertise their classes. Dancing Isn't a Crime! Iranian Women Protest Against the Arrest of Teenage Instagrammer, Videos go Viral.

The social media handles of the musicians which were taken over by officials were later updated with a message on Thursday following which it became inaccessible. It read, "By the order of the respectable judicial authority, this web address has been seized due to publishing criminal content and those involved in the crimes noted in the case are being prosecuted". Since the Islamic Revolution of 1979, various regressive laws have been introduced in the country. People who restrain from obeying to the laws are often arrested. Multiple times in the past, people were held for posting content that the authorities found inappropriate.