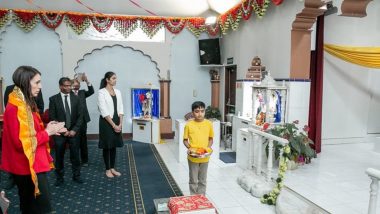 A picture and video of PM Ardern removing her sandals before entering the Radha Krishna temple are widely circulated. At the Hindu place of worship, the Prime Minister participated in aarti and received prasad from the priest. She also greeted people with a namaste. As seen in the video, as soon as Ardern enters the temple, a conch shell is blown. The priest starts to chant Sanskrit mantras and the PM stands with her hands folded.

After the aarti, the priest applies a tika on Ardern's forehead and puts a holy cloth which she humbly accepts by bowing down. Indian envoy Muktesh Pardeshi tweeted: She (Jacinda Ardern) paid a short visit to Radha Krishna Mandir and enjoyed a simple Indian vegetarian meal - Puri, Chhole and Daal." Her visit comes ahead of national elections in New Zealand on September 19. New Zealand PM Jacinda Ardern Keeps Her Cool as 5.6 Magnitude Earthquake Hits During Live TV Interview, Watch Video.

Some precious moments with Hon. PM of New Zealand ⁦@jacindaardern⁩ at ⁦@indiannewslink⁩ event on 6 Aug 2020. She paid a short visit to Radha Krishna Mandir and enjoyed a simple Indian vegetarian meal- Puri, Chhole and Daal. 🙏 pic.twitter.com/Adn25UE1cO

The Radha Krishna Temple is a part of Mahatma Gandhi Centre run by the Auckland Indian Association. Indians constitute 5 percent of the Kiwi population and the Hindi has emerged as the fourth largest spoken language across New Zealand.

(The above story first appeared on LatestLY on Aug 09, 2020 11:53 AM IST. For more news and updates on politics, world, sports, entertainment and lifestyle, log on to our website latestly.com).