Meanwhile, Ananya Panday is all set to feature in her first Bollywood film which is Punit Malhotra starrer Student of the Year 2, along with Tiger Shroff and Tara Sutaria. 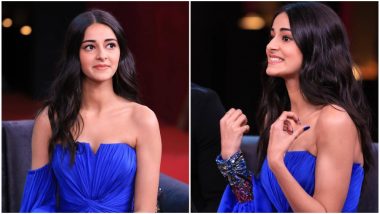 Koffee With Karan 6 never fails to amaze the netizens. It is the new source of memes and we are not even surprised. As the craze of Hardik Pandya subsides, the new trend is on and this time it is Ananya Panday. The memes on this Student of the Year 2 star has taken over the internet which are hilarious. The star-kid’s expressions blew away the fans, giving the fans a reason to make jokes and memes. From Getting Drunk and Proposing Tara Sutaria to Being a Gossip Monger, Ananya Panday is Exactly Opposite Her Online Shy Persona!.

However, Chunky Panday’s chirpy debutante is very much enjoying this social media attention. Those who follow her Instagram, might know that she is very much active on it. From her parties to her regular day-today chores, she posts stuff to keep her followers entertained. However, Karan Johar’s KWK6 was first time that she legit met her future audience. While the fans assumed all this time that she was this timid girl-next-door, her debut on the chat show was explosive and unexpected. Her revelations and her facial expressions worked as the fodder to create memes. Check out some of the funny memes here.

Can We Skip Math Exam?

Meanwhile, she is all set to feature in her first Bollywood film which is Punit Malhotra starrer Student of the Year 2. On the coffee couch, she even made a self-declaration that she ‘did not deserve’ to be on the show, taking a subtle jibe at herself over the ‘nepotism’ issue. After making some juicy revelations and being sporty, she also won the ‘hamper’ against the competition with co-stars Tiger Shroff and Tara Sutaria who also graced the show.

(The above story first appeared on LatestLY on Feb 20, 2019 09:06 PM IST. For more news and updates on politics, world, sports, entertainment and lifestyle, log on to our website latestly.com).