Premium petrol price in Madhya Pradesh's capital Bhopal crossed Rs 100-mark on February 13. A youth Congress office-bearer demonstrated against the rise in fuel prices by raising cricket bat, and a helmet as the premium petrol price crossed the century-mark in Bhopal. The image is going viral on social media. 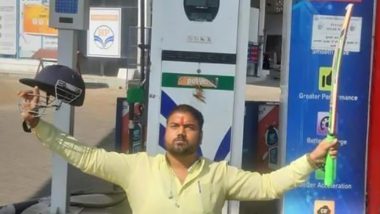 Bhopal, February 15: Premium petrol price in Madhya Pradesh's capital Bhopal crossed Rs 100-mark on February 13.  After the premium petrol price breached Rs 100-mark, Congress launched an officed against the Central and Bharatiya Janata Party (BJP) ruled states. A man protested against the rise in fuel prices by raising cricket bat, and a helmet as the premium petrol price crossed the century-mark in Bhopal. The man was reportedly a youth Congress office-bearer. Petrol Price in Bhopal: Premium Petrol Out after Hitting Century, Pumps in MP Capital Stop Selling It After Rates Cross Rs 100 Mark.

The image of the Congress worker demonstrating with a cricket helmet and a bat outside a petrol pump in Bhopal is going viral on social media. Netizens are taking a dig at the government over the increasing petrol prices in the country. After the prices crossed Rs 100-mark, older fuel stations faced issues as they lacked three-digit displays. Fuel Prices in Bhopal Hiked For 3rd Consecutive Day: Petrol Retailed at Rs 96.69/Litre, Diesel Sold at Rs 87.20/Litre A Day After Premium Petrol Breached Rs 100-Mark.

After a 28 paise rise on Sunday morning, the per-liter rate of petrol with additives for retail sale crossed Rs 100.

"And here marks the century of Petrol price!"

And here marks the century of Petrol price! #IndiaBeingSilenced pic.twitter.com/IdBNk9QV6P

"After lot of hardwork and struggle finally !! Century for Petrol !"

After lot of hardwork and struggle finally !!

"Indian's are ready to Celebrate when Petrol price nears Rs.100 per litre"

According to reports, Madhya Pradesh imposes the highest fuel taxes among all states. The state levies tax and cess of 39 percent on petrol and 28 percent on diesel. According to reports, Rs 31 per litre for petrol and Rs 23 per litre for diesel are the taxes imposed by the Centre. Fuel prices in the country have been fluctuating regularly since the "dynamic fuel pricing" system was introduced in 2017.

(The above story first appeared on LatestLY on Feb 15, 2021 02:30 PM IST. For more news and updates on politics, world, sports, entertainment and lifestyle, log on to our website latestly.com).