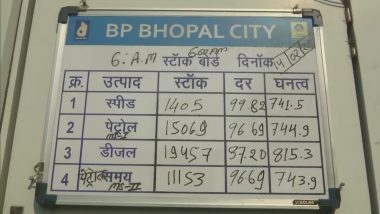 Bhopal, February 14: Fuel prices in Madhya Pradesh's capital Bhopal hiked for the third consecutive day. Petrol prices in Bhopal increased by 30 paise on Sunday. Petrol is now being sold at Rs s 96.69 per litre in the Madhya Pradesh's capital. Diesel prices in Bhopal also increased by 34 paise on February 14. The diesel price has gone up to Rs 87.20 per litre. Locals are demanding that the government should control inflation.

One of the residents told news agency ANI, "The government should control inflation. The continuous hike in fuel prices is affecting the common man." The price of premium petrol, however, decreased. It is now being sold at Rs 99.82. On Saturday, the price of premium petrol in Bhopal shot over Rs 100 Rs 99.73. The cost of the fuel in the capital city of Madhya Pradesh was recorded at Rs 100.04. Petrol Price in Bhopal: Premium Petrol Out after Hitting Century, Pumps in MP Capital Stop Selling It After Rates Cross Rs 100 Mark.

Price of petrol & diesel in Madhya Pradesh's Bhopal at Rs 96.69 per litre and Rs 87.20 per litre respectively today

"The government should control inflation. The continuous hike in fuel prices is affecting the common man," says a local pic.twitter.com/2ztjXuMF0T

Due to the three-digit price of the premium petrol, it was not being displayed by the old machines at stations, leading the vendors to halt its sales to the customers. Fuel prices in the MP have been fluctuating regularly since the "dynamic fuel pricing" system was introduced in 2017.

(The above story first appeared on LatestLY on Feb 14, 2021 12:14 PM IST. For more news and updates on politics, world, sports, entertainment and lifestyle, log on to our website latestly.com).