SN Lakshmi Sai Sri has become a social media sensation for cooking 46 dishes in only 58 minutes. The internet is mighty impressed with her. ‘Maha Lakshmi Express,’ Amul’s quirky topical ad for the UNICO record holder rightly acknowledges the girl's achievement. 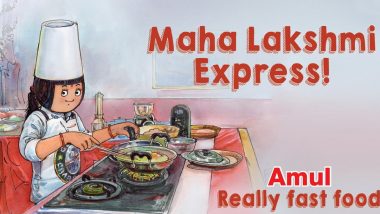 How many dishes can you cook in an hour? Many, two or three, or for some enthusiasts, it can go to five. But a Tamil Nadu girl received a world record title for being quick in preparing different dishes. SN Lakshmi Sai Sri has become a social media sensation for cooking 46 dishes in only 58 minutes. The internet is mighty impressed with her and Indian dairy firm, Amul went on dedicating a doodle for her. ‘Maha Lakshmi Express,’ Amul’s quirky topical ad for the UNICO record holder rightly depicts how fast the girl is. Soon after it was posted on Twitter, netizens were all in praise as the doodle adorably showcase Lakshmi, whose picture while cooking the dishes went viral on social media.

Lakshmi entered the UNICO Book of World Records by cooking 46 dishes in 58 minutes in Chennai, earlier this week. When asked, she reported that she learnt cooking from her mother and eventually developed a keen interest in cooking. Her mother, N Kalaimagal, told ANI that her daughter started cooking during the lockdown. She found her interest amid a pandemic-filled year. Gitanjali Rao, 15-Year-Old Indian-American Girl, Named First-Ever TIME ‘Kid of The Year’.

Amul who never fail to acknowledge titleholders and ongoing debates and hashtags on social media, created an adorable doodle for the girl. The Amul girl, representing Lakshmi, can be seen shyly smiling and cooking her meals. The doodle reads, “Maha Lakshmi Express!” and “Amul Really Fast Food,” at the bottom. The topical ad is loved by all on social media.

Lakshmi amazingly utilised her time during the lockdown and achieved outstanding recognition, making the country proud and inspiring girls of her age that they can achieve whatever they want to. Cooking above 40 dishes in nearly an hour is no piece of a cake, and Lakshmi deserves all the praises and love she is getting from social media.

(The above story first appeared on LatestLY on Dec 17, 2020 03:09 PM IST. For more news and updates on politics, world, sports, entertainment and lifestyle, log on to our website latestly.com).