After a shiny monolith mysteriously dissapeared from Utah, a giant one appeared in Romania and no one knows how! The triangular metallic pillar reportedly was found a few metres away from an ancient landmark Petrodava Dacian Fortress in Northern Romania’s Piatra Neamt and it has garnered a lot of reactions online. 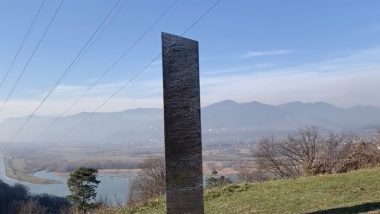 It is 2020, and it seems like everything is possible! The year has given us many reasons, conspiracy theories and more suggesting many turns of events. Some could be mysterious! A shiny monolith in a desert in Utah disappeared without a trace, sparking speculation that it could have been the work of aliens. Before we could have come to any conclusion, another monolith, has surfaced in Romania and the triangular metallic pillar reportedly was found a few metres away from an ancient landmark Petrodava Dacian Fortress in Northern Romania’s Piatra Neamt. Is it the same structure that disappeared from Utah? Is this also the work of an alien or an artist? With the pictures going viral, netizens are puzzled and creating their own conspiracy theories and reactions on the internet.

Daily Mail noted that the shiny triangular pillar was spotted a few metres away from the well-known archaeological landmark the Petradava Dacian Fortress, which was built by the ancient Dacian people between 82 BC and AD 106. About 13-ft tall, the structure faces Mount Ceahlau on the one side, which is one of the seven natural wonders in Romania. The pictures going viral on the internet has created quite a buzz among the netizens. They could not help but point out the structure that recently disappeared without a trace. Its discovery fired up the minds of conspiracy theorists and sci-fi fans on social media. Alien Base in Mexico? Video Captures UFOs Apparently Entering and Exiting From a Volcanic Mountain Popocatépetl.

So the #Monolith first appeared in #Utah and then disappeared yesterday. Then seemingly instantly appeared on the other side of the globe in less than 24 hours in #Romania ?!?!? pic.twitter.com/MrgG3La5vE

Netizens Have Their Own Theory!

End of days is near

The Appearance is Different!

No really - they look completely different

And Obviously We Have People Making Hilarious Jokes Around It

The origin of Monolith in Romania has left officials baffled. But it does not appear to be the same as the one that disappeared from Utah. The monolith found in Romania has a mirror surface and appears to have been covered with graffiti, which was missing in the metal structure in Utah. Romanian officials still do not know who is responsible for erecting the mysterious monolith.

Neamt Culture and Heritage official, Rocsana Josanu pointed out that the structure is on private property, but the owner is not known yet. It is in a protected area on an archaeological site, which means that whoever installed it would need permission from the institute and also get approved by the Ministry of Culture.

(The above story first appeared on LatestLY on Dec 01, 2020 10:42 AM IST. For more news and updates on politics, world, sports, entertainment and lifestyle, log on to our website latestly.com).