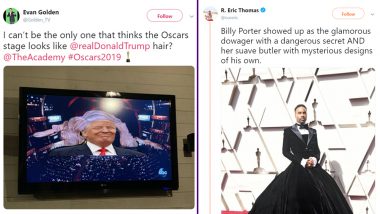 A lot was being anticipated about the 2019 Oscars, right from how the gig would look like host-less, to if Oscar-nominated Queen biopic, Bohemian Rhapsody will win the Oscars. Well, we are yet to know a lot of things but it is surely not too soon to LOL right?! Some of the memes have already begun to take the internet by storm. People are joyful about Mike Myers and Dana Carvey taking the over the stage Oscars stage to present Bohemian Rhapsody and as encapsulated by critic Alan Sepinwall's tweet that read: "Can they just retroactively give all of Bohemian Rhapsody's awards tonight to the first Wayne's World film?" However, the gig also saw people couldn't control their laughter when the Academy Awards' stage reminded them of President Donald Trump's hairstyle! Here are some of the past Oscars Memes: From La La Land Blunder Memes to Jennifer Lawrence Ones, Funny Academy Award Jokes That Made Us ROFL.

Here are some of the memes from Oscars 2019 that will leave you rolling on the floor LAUGHING!

grateful for the radicalization of anne hathaway pic.twitter.com/Dp94d1DlqJ

Billy Porter showed up as the glamorous dowager with a dangerous secret AND her suave butler with mysterious designs of his own. pic.twitter.com/3clcmVSljG

Category Is: Cinderella Who? #Oscars pic.twitter.com/qR8a43RwZi

Me making a surprise appearance at my own funeral. pic.twitter.com/jP7O10TX8v

I can’t be the only one saying this, but the red Oscars in the background look like Melania’s Christmas trees and the stage looks like Trump’s hair. #Oscar pic.twitter.com/EmuoICsNFv

I can’t be the only one that thinks the Oscars stage looks like @realDonaldTrump hair? @TheAcademy #Oscars2019 pic.twitter.com/Xcj6S7FZzo

Billy Porter: Rhett, where will I go? What shall I do?

Looks like a nun from Gone With the Wind

Jason Mamoa's scrunchie is more popular than you'll even be

The best part is Momoa is totally wearing a scrunchie on his wrist. #oscars pic.twitter.com/F2xFF07X4g

Me not reading your tweets #Oscars2019 pic.twitter.com/LjA9ReYN9A

Of course Marie Kondo is at this year’s Oscars pic.twitter.com/ArAmZbUi6j

dressing like the Oscar gets you the win #Oscars pic.twitter.com/MHADfTRQSd

Who needs an Oscar when you ARE the Oscar! Glenn Close has arrived to collect her trophy. #Oscars pic.twitter.com/5J4UPNujL8

why does emma stone look like a choco taco pic.twitter.com/LZlXzNxV6t

Emma Stone out here looking like a snack. Specifically of the waffle cone variety pic.twitter.com/cy5mHdrVTA

If there was an Oscar meme award 2019 we should give it to Emma Stone's outfit or was Jason Mamoa's scrunchie? We are confused. Well, Aquaman did totally own his red carpet look and we did miss Priyanka Chopra on the red carpet. So many emotions so less time. We cannot wait for more memes to surface, what about you?

(The above story first appeared on LatestLY on Feb 25, 2019 09:45 AM IST. For more news and updates on politics, world, sports, entertainment and lifestyle, log on to our website latestly.com).