A lot of people's Instagram stories are currently a showcase of some random images from their camera rolls. One user's attempt at it has miserably failed and it is going viral on Twitter. Instead of posting pictures, the person posted questions posed by themselves and replied to them as well on the stories! 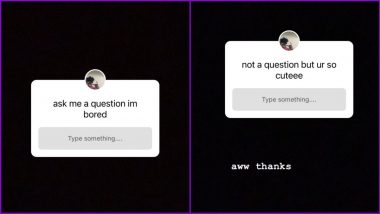 A new trend has taken over in the last few days of 2020 on Instagram. Called the "Post the Pic Of..." or "Post The Picture Of..." people are posting pictures on their stories of what their followers ask. So a lot of people's Instagram stories are currently a showcase of some random images from their camera rolls. And people have even made funny memes and jokes on it, tired of seeing it all. But one user's attempt at it has miserably failed and it is going viral on Twitter. Instead of posting pictures, the person posted questions posed by themselves and replied to them as well on the stories! Screenshot of this "fail" have been shared on Twitter and it is going viral. Netizens have some funniest replies, some feeling embarrassed on their behalf! 2020 in a Nutshell Funny Memes Trend Online: Hilarious Videos, Pics and Jokes Trying to Sum Up This Year Will Leave You LOLing!

The latest trend on Instagram is done via the Ask Me Anything feature on the photo-sharing app. The participant writes "Post a Picture of..." and users have to reply in the dialogue box. But in this case, the user herself wrote compliments about self and posted them as people's replies! This accidental mistake is too funny for others and the pics are going viral on Twitter with funny reactions. Someone has clearly failed at doing the challenge right. Meanwhile, even Gigi Hadid's Post a Pic of Challenge had amused netizens because of her Desi spice cabinet.

whose going to tell her? pic.twitter.com/IMHPt1ii3F

Funny isn't it? She probably typed out the replies to her as new questions, without realising the mistake of the format. And although it says close friends, now a lot of people on the internet know about it. Check how some users reacted.

Feeling Embarrassed on Their Behalf

I will seriously be so embarrassed for her/him

It's self love guys💞

When she realized Instagram showed who asks the question pic.twitter.com/OQ1cY4dzvf

The 2nd Hand Embarrassment Getting to People

Lord god please protect me from making any fool out of myself🙏 pic.twitter.com/aR7e4ttxaW

The internet's having fun at this blunder while others say this is the kind of self-love and confidence they need for the next year. The user could be embarrassed right now, but at least he/she has made a lot more people laugh towards the end of this tough year.

(The above story first appeared on LatestLY on Dec 30, 2020 01:19 PM IST. For more news and updates on politics, world, sports, entertainment and lifestyle, log on to our website latestly.com).