Gigi posted a picture of her kitchen cabinet, which shows her spices. What really interesting is all the labels on them of Desi masalas like Haldi, Chilli, Jeera seed, Tandoori Masala, Garam Masala among others. And keen users also spotted the Seekh Kabab Masala packet by Shan Masala, a specialty from Pakistan. It has got some interesting comments on social media. 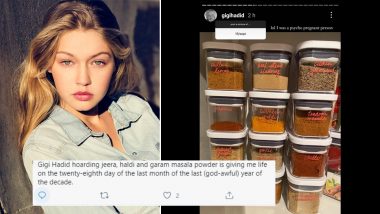 If there is something that makes Indian food stand out from the rest, it is the spices and the variety of them all. Indian cuisine is made with such a variety of spice, that there are special spices for some individual dishes. And supermodel Gigi Hadid has showed that she loves them. In the ongoing trend of "Post a Picture of..." on Instagram, Gigi posted a picture of her kitchen cabinet, which shows her spices. What really interesting is all the labels on them of Desi masalas like Haldi, Chilli, Jeera seed, Tandoori Masala, Garam Masala among others. And keen users also spotted the Seekh Kabab Masala packet by Shan Masala, a specialty from Pakistan. Seeing Hadid's Desi masala collection has got some interesting comments on social media. Gigi Hadid’s Pregnancy Photoshoot In Monochromes Flaunting Her Baby Bump Is Delicate, Daring And Breathtakingly Gorgeous (View Pics).

While participating in the recent 'Post a Pic' trend someone asked her to share a photo from September 15. In response, the newly-turned mother shared a picture of her kitchen cabinet and wrote, "lol I was a psycho pregnant person." Clearly, she was craving some spicy food it seems. The picture shows her spice cabinet, all labeled with their names. Among them include Haldi (turmeric), Jeera (cumin), Garam Masala, Tandoori Masala, Garlic and Coriander among others. And some people also carefully noticed the Shan Masala packet of Seekh Kabab at the side, although it is not even completely seen. But Twitterati is sort of feeling validated and happy about Gigi's Desi taste in the kitchen. Turmeric and Pepper: Why You Should Combine These Two Powerful Spices In Your Cooking.

PLEASE GIGI HAS TURMERIC GARAM AND TANDOORI MASALA IN THEIR PANTRY WE LOVE A DESI HOUSEHOLD pic.twitter.com/5FRwNQFKp6

Gigi Hadid using Shan masala (the box on the right) has absolutely sent me😂 pic.twitter.com/C8SfIhortq

my biggest flex in life now is that gigi and zayn call it haldi, garam masala and tandoori masala just like me and I think I can love with that information pic.twitter.com/z7CbtfZ97j

Gigi Hadid hoarding jeera, haldi and garam masala powder is giving me life on the twenty-eighth day of the last month of the last (god-awful) year of the decade.

People are really too happy to know that the supermodel loves cooking with Indian spices. Some say that Zayn's influence has worked on her to get the taste of desi cooking. Maybe or maybe not, but the piece of information is surely making people happy.

What is Shan Masala?

Shan Foods is a packaged masala brand from Pakistan and is extremely popular in the Indian subcontinent. The company goes back to 1981 and today it is a powerful global brand that has presence in over 65 countries across 5 continents. Their masalas are extremely popular and despite a slow supply chain there are always takers for them in the Indian market.

(The above story first appeared on LatestLY on Dec 28, 2020 09:10 PM IST. For more news and updates on politics, world, sports, entertainment and lifestyle, log on to our website latestly.com).