Priyanka Chopra and Nick Jonas Greet PM Modi at Wedding Reception in Delhi And Twitter Gets New Bunch of Funny Memes and Jokes! 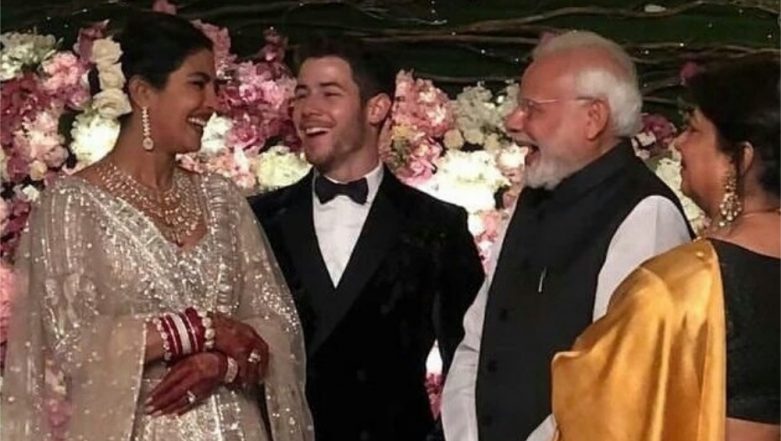 Priyanka Chopra and Nick Jonas surprised everyone today (not really) with their wedding pictures, followed by pics from their first reception. Just when the fans were trying to decode what exactly happened in the Christian and Hindu wedding ceremonies at Umaid Bhavan Palace, the reception pics were out. First things first. PC and Nick looked lovely together in glamorous reception in Delhi, so did their family members. But the latest buzz on the internet is not her outfits or look but the prominent guest of the evening, India's Prime Minister, Narendra Modi. Priyanka Chopra and Nick Jonas' Wedding Reception PICS OUT and They Look BREATHTAKING!.

The news was already out that PM Modi might be invited to the reception but there was no confirmation from the celebs. Now that the pictures have splashed across the internet, the netizens cannot have enough of it. Also, 2018 is a year of jokes and memes and no one can really get away from it, not even the prime minister or global icons. Check out how some funny brains reacted to the meet. Priyanka Chopra-Nick Jonas Wedding: Here Are More Pictures From The Newly-Weds' Album.

This Never Gets Old!

Nick : where shall we go for honeymoon?

Nick Needs an Aadhar Card too!

Nick Jiju Be So Clueless

Since the photos from her wedding festivities in Jodhpur have been out, they fell into the hands of the meme-makers. The fireworks at the palace, the surprised aunty at mehendi ceremony, the award-like sangeet ceremony, the lengthy veil of the wedding gown have already turned into memes. However, one cannot take away the fact that people are still to get over the larger than life wedding of Mr and Mrs Jonas. Well, wait till the pictures from her Mumbai reception are out soon!