A stunning image of the moon has been clicked by a 16-year-old astrophotographer and amateur astronomer, Prathamesh Jaju. The picture of the moon is already doing rounds on the internet. 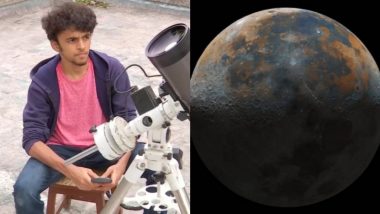 A Pune-based 16-year-old ‘astronomy lover’, Prathamesh Jaju has managed to click one of the most detailed and clearest images of the Moon. The stunning image of the moon is already doing rounds on the internet. The image is a composite of 55,000 images which add up to over 186GB in size. Talking about the same, Jaju told ANI, "Raw data was 100GB & when you process it the data gets bigger so it was around 186GB. When I stitched them together, the final file was around 600MB."

He also said that he captured the image of the moon on May 3 at 1 am. Jaju captured for around 4 hrs with videos and images. “It took 38-40 hrs for processing. The reason behind 50,000 pictures was to get the clearest picture of the moon. I stitched them together & sharpened image to see crisp details of the moon,” he added.

Prathamesh also explained that he read some articles and saw some YouTube videos and learned information about processing and how to capture these stunning images of the moon. He wants to become an astrophysicist and study astronomy professionally but astrophotography is just a hobby for him right now.

Pune: A 16-year-old boy Prathamesh Jaju gain popularity on internet by clicking one of the clearest pictures of moon

He says,"Raw data was 100GB & when you process it the data gets bigger so it was around 186GB. When I stitched them together, the final file was around 600MB" pic.twitter.com/ia2AecW37D

This image is an HDR Composite of two different images made to give it a 3-dimensional effect. This is my most detailed and clearest shot of the third quarter Mineral Moon: Prathamesh Jaju

According to The Print report, the 16-year-olf teenager started exploring astronomy photography in 2018. Further, the cancellation of his Class 10 exams due to the ongoing pandemic has motivated him into learning more about astrophotography. Talking about his viral image of the moon, Jaju said: “I did not expect my image of the moon to go this viral, but yes, it is my best shot so far.”

Since childhood, he had a passion for space and astronomy. Jaju was also a fan of the science fiction movie/TV franchises Star Wars and Star Trek. When Jaju joined one of India’s oldest amateur astronomy clubs, Jyotirvidya Parisanstha (JVP) in Pune as a volunteer at the age of 13, he finally got to know more about space.

(The above story first appeared on LatestLY on May 19, 2021 04:31 PM IST. For more news and updates on politics, world, sports, entertainment and lifestyle, log on to our website latestly.com).