Right from receiving flak for her "don't touch" attitude to now going viral for her picture in heavy makeup, Ranu Mondal has been the talk of the town for a while. Since last night, some of Ranu Mondal's pictures wearing a golden and white lehenga and heavy makeup are going viral. 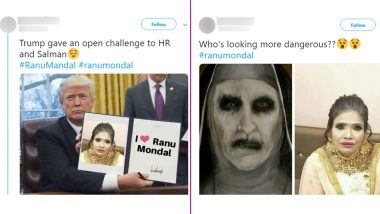 We have witnessed Ranu Mondal's journey to quick fame and then to becoming the subject of trolls, funny memes and jokes in no time. Right from receiving flak for her "don't touch" attitude to now going viral for her picture in heavy makeup, Ranu Mondal has been the talk of the town for a while. Since last night, some of Ranu Mondal's pictures wearing a golden and white lehenga and heavy makeup are going viral. And when we say heavy makeup, we're serious! The makeup makes her look like a major transformation queen. So much so, that some people have started to think that maybe it is a product of photoshop.

In the pictures, you can clearly see her completely transformed look. She is wearing a golden and white lehenga with her hair in a traditional updo. You can see a few frays falling around here and there too. However, it is her loud makeup that is making the internet go ROFL. While we are still not completely sure if it a makeup artist who brought forth the transformation or photoshop, but the pictures have taken over social media and HOW! This comes very soon after Ranu Mondal's 'No-Touch' attitude video after becoming famous went viral! Funny memes on 'Things You Should Not Touch' were everywhere!

Netizens have started to make funny memes and jokes using the pictures of Ranu Mondal in heavy makeup pictures and they are hilarious. Her changed skin colour because of the makeup and more defined eyes are leaving people in disbelief. Funny memes and jokes are making people go LOL. Check out some of the funniest ones:

Ranu Mondal is sadly becoming a parody of herself. I couldn't help but be reminded of this scene when I saw her latest picture.#RanuMandal #ranumondal pic.twitter.com/9mN1Hw06HR

She: I hate makeup

Well, it is being said that the picture of Ranu Mondal was actually from a beauty parlous inauguration ceremony in Kanpur. She had been there as a guest and as a part of the event, makeup was done on her face at the beauty parlour. Watch the video below to know what happened:

Well, there is still no confirmation whether the pics are just exaggerated using photoshop because some of the pictures on social media don't make her look so golden and bright as in the others. Well, Ranu Mondal hasn't yet said anything about it but her pictures are surely breaking records. As soon as the pictures were released on social media, they went viral like wildfire.

(The above story first appeared on LatestLY on Nov 17, 2019 09:06 AM IST. For more news and updates on politics, world, sports, entertainment and lifestyle, log on to our website latestly.com).