Check out these hilarious memes on Renuka Shahane from Hum Aapke Hain Koun! 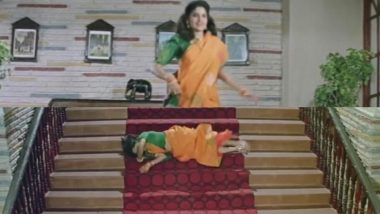 Are you even a 90s fan if you haven't lost count of the number of times you have re-watched Hum Aapke Hain Koun? The movie stars Madhuri Dixit, Salman Khan in lead roles while Renuka Shahane and Mohnish Bahl feature in supporting roles. The movie is a pop culture phenomenon, inspiring hundreds of memes over the years. The latest HAHK meme has hit the internet and it takes a dig at the only tragic moment of the entire film. Spoiler alert but Renuka's character in the film dies after accidentally falling down a flight of stairs. Madhuri Dixit and Renuka Shahane Give us ‘Hum Aapke Hai Koun’ Feels as They Dance on Lo Chali Main After 24 Years! (Watch Video).

From this scene onwards, this high-on-ecstasy kind of happy-go-lucky movie...

...turns into a sobfest that will make a Shakespearean tragedy look like a sunny day at Essel World.

And since, Twitter is a gift that keeps on giving, this heartbreaking scene has fallen victim to the twisted minds of the millennials. The tragic accident has been turned into a meme about things going downhill unexpectedly. From sudden drop in room temperature to biscuit falling into a teacup while dipping, Renuka Shahane memes have let netizen's imagination go Dhik Tana Dhik Tana Dhik Tana. I bet you will also find yourself rolling on the floor and laughing (not like Renuka, though).

Me *removes cover from phone for a day*

My phone the same day : pic.twitter.com/IjDlgnxYtC

My clothes as soon as I open My Almirah. pic.twitter.com/FlR2xvy06g

You see her rollin, you hatin'

Renuka Shahane as a puppy. pic.twitter.com/z4wYhlJc2d

We wonder how the cast of Hum Aapke Hain Koun would react to these memes. Especially, Renuka Shahane. We are so waiting to hear from her. Also, if you have not watched HAHK, do yourself a favour and please watch it. Thank us later.

(The above story first appeared on LatestLY on Jun 19, 2019 11:47 AM IST. For more news and updates on politics, world, sports, entertainment and lifestyle, log on to our website latestly.com).