'Storm Area 51' Raid to Search Aliens! Facebook Event Invites Everyone to Search for Extra-Terrestrials in Nevada on September 20 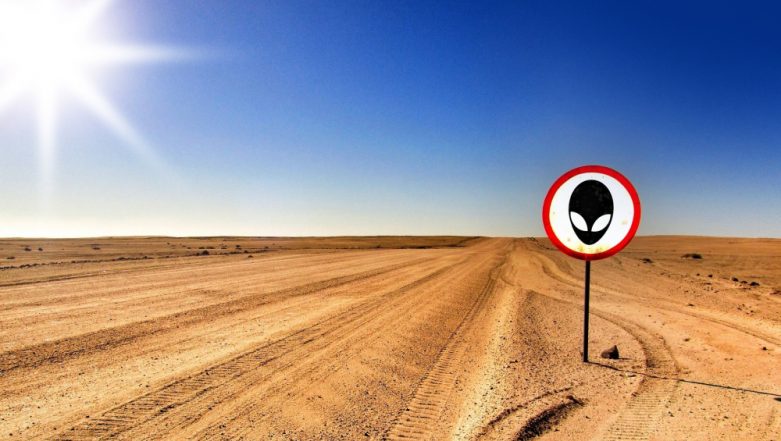 Have you always been keen about the existence of aliens? Do you believe that they do exist but we haven't come across the extra-terrestrials yet? Then to uncover the mystery almost lakhs of people have signed up to raid Area 51 in Nevada. A Facebook event called "Storm Area 51, They Can't Stop All of Us," has asked users from around the world to join in raiding the area, a major focus of conspiracy theorists for years. The event is taking place on September 20 and if you are interested then its time to book your tickets. Aliens Are Having Sex With Humans to Create Hybrid Species to Save Our Planet, Says Oxford Professor!

The event has a "Naruto Run"-- a Japanese style of running with arms outstretched backwards and heads forward in Area 51. The event page says, "We can move faster than their bullets." And the attendees are so prepared, some have made mock battle plans in case of an attack from the aliens. The description on the page reads, "We will all meet up at the Area 51 Alien Center tourist attraction and coordinate our entry. If we naruto run, we can move faster than their bullets. Let’s see them aliens." People on Twitter are also expressing their excitement about the raid. Sex With Aliens? People Have Had Strangest Encounters With Extra-Terrestrials, From Losing Virginity to Abduction by Them.

How I imagine the Area 51 raid is gonna end up looking like pic.twitter.com/fnQGp48hrE

My alien a week after we raid Area 51. pic.twitter.com/sJhOkfTivl

Chilling with the alien

my alien that i snuck out of Area 51 posting on instagram about hot alien summer pic.twitter.com/eWaIM9dJ1a

Area 51 is a highly classified Air Force base about 150 miles from Las Vegas. Many theorists believe that UFO remains have crashed here. There have been numerous reports of UFO sightings in the vicinity.  The secretive nature and connection to aircraft research have led it to become a focus of UFO conspiracy theories. Some of the common conspiracy theories call it an area of meetings of extraterrestrials, development of time travel and teleportation.