The Family Man 2 starring Manoj Bajpayee and Samantha Akkineni has been loved by millions of fans. However, netizens have shared several funny memes and jokes featuring 'Chellam Sir' from the series. 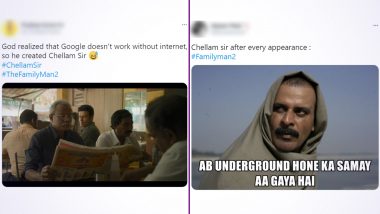 Manoj Bajpayee and Samantha Akkineni starrer ‘The Family Man 2’ has garnered a lot of appreciation from the audience, as well as critics. Packed with action, comedy, and thrill, ‘The Family Man Season 2’ has been liked by many. However, Uday Mahesh, who portrayed the role of Chellam Sir in the series, has stolen the show. He is currently internet’s current obsession. With his impeccable knowledge and connections on the show, Chellam Sir has left the viewers extremely impressed.

Netizens are continuously pouring in appreciation for the Manoj Bajpayee and Samantha Akkineni starrer. On the other hand, they are also sharing several hilarious memes and jokes featuring ‘Chellam Sir’ on Twitter. However, during an interview with the Hindustan Times, Manoj Bajpayee who essayed the role of Srikant Tiwari has said, “Yes, we knew, we had a very good product in hand, but even then, one can’t imagine this kind of love, and reception. Social media reactions are a testimony to it, so it is not something we can be blamed for — there’s no overhyping or exaggeration.”

Now, Let's Take a Look at Some of the Best Memes and Jokes Featuring 'Chellam Sir' from The Family Man Season 2 Here:

Sibling Goals with The Family Man 2

When you see your mom beating your sibling pic.twitter.com/jEMGnnupfU

Even Elon Musk is a Fan of 'Chellam Sir'

This Scene is Extremely Funny

If you are too a fan of the character 'Chellam Sir' from The Family Man Season 2, then let us know in the comment section. Currently, The Family Man 2 is streaming on Amazon Prime Video.

(The above story first appeared on LatestLY on Jun 12, 2021 06:44 PM IST. For more news and updates on politics, world, sports, entertainment and lifestyle, log on to our website latestly.com).